The "Jungle trap" is a room in Brinstar. It appears in Super Metroid.

This room consists of two floors. The upper floor is made of metal tiles, rather resembling those found in the original Metroid in areas such as Ridley's Lair. At the other end of the room is an Energy Tank in front of a Green Hatch. However, a trap is hidden right in front of the Tank: an invisible drop that sends Samus falling into the second floor, a subterranean chamber lined with spikes on the ceiling and ground. Pit Blocks in the invisible drop prevent Samus from Turbo Bombing, Space Jumping or Wall Jumping back up. If Samus has the X-Ray Scope, it can be used to see the hidden gap. A running jump is required to clear the gap and collect the tank.

The lower floor is made of the green jungle material found in much of Brinstar. It leads into a shaft containing three Etecoons, who teach Samus how to Wall Jump out of the shaft, at the top of which is an exit back into the main Brinstar shaft. To the left after the drop is a door leading into a Save Room; however, if the player is incapable of Wall Jumping, saving at the station may result in the game needing to be restarted.

As stated, the lower floor's ceiling and walls are lined with spikes, with multiple midair platforms being the only way to cross to the other side. Making traversal even more difficult is the gradually decreasing size of the platforms, as well as the presence of Beetoms, and Air Holes that spawn Zebbos indefinitely. The Beetoms can drain Samus's energy by latching on, and cause Samus to fall off and/or jump into the ceiling spikes, damaging her. If frozen, the Beetoms will take up space until they unfreeze. Samus can use a Power Bomb to eliminate them quickly. On the plus side, the respawning Zebbos provide Samus with an opportunity to replenish any lost energy by killing each one that emerges.

Energy Tank
In plain view behind the hidden drop.

A. LOOK BEFORE YOU LEAP (pg. 48)
"There is an invisible gap in the floor just before you reach the Energy Tank. You should get a running start and leap over the gap to get the Energy Tank."

B. TAKE YOUR SWEET TIME (pg. 48)
"This room is full of spikes, small ledges and life-sucking enemies. Take your time going through it--and be careful."

RUN AND JUMP (pg. 30)
"Just before the energy pod is an invisible hole, which can only be seen through the X-ray scope. The only way past is a hi-speed running jump. Memorise where the hole begins and the rest is down to timing. If you get it wrong, it's a long way round to have another go!" 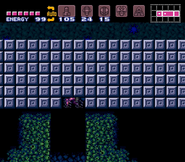 Samus drops through the invisible hole. 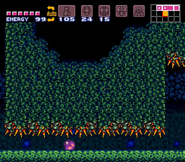 Samus rolling under a large overhang lined with spikes.
Community content is available under CC-BY-SA unless otherwise noted.
Advertisement