Jupiter is the fifth planet out of eight from the Sun.

While Jupiter is presumed to exist in the Metroid universe (since Earth is confirmed to exist), it has yet to appear in any canonical media. However, it is named in small font beneath a diagram in the Metroid Prime Trilogy art booklet; the same image also appears in the concept art of Metroid Prime, but is not used for any in-game scans. 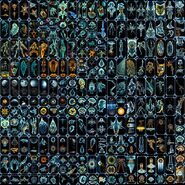 Original unmodified NASA image.
Full text: "Astrometric displacement of the Sun due to Jupiter as at it would be observed from 10 parsecs, or about 33 light-years."
Italiano
Community content is available under CC-BY-SA unless otherwise noted.
Advertisement