Frozen and thrown into lava by the Deleter

Black, light parts are a brown base.[1]

K.G. Misawa (ケイジ・ミサワ, Keiji Misawa?) was a soldier in the Galactic Federation Army and the recon scout of the 07th Platoon, serving under Adam Malkovich. He only appears in Metroid: Other M.

K.G. wore glasses and was described as being the recon scout of the 07th Platoon. He was ordered to scout the Residential Quarters. His name and physical appearance suggested that he was of Japanese descent. In the Exam Center, he can be seen examining a table in the "containment room" with James Pierce.

After the post-credits game, K.G. was listed in Samus's Characters menu as missing because the Federation could not find his body. This was because the Deleter, shown in a cutscene after defeating the RB176 Ferrocrusher threw another frozen soldier into the lava. Because the bodies of Lyle Smithsonian, Maurice Favreau and James Pierce are accounted for as well as Samus witnessing Anthony Higgs supposedly dying, and Adam Malkovich sacrificing himself, this could only mean that the frozen soldier was K.G. The Nintendo Official Guidebook for Metroid Other M confirmed that K.G. was the soldier that was killed and thrown into the lava.

Beginning
"Investigating the BOTTLE SHIP under Adam's command after receiving the distress signal."

After King Kihunter
"Currently heading toward the Exam Center in Sector 1 under Adam's command."

After Rhedogian battle #2
"Currently heading toward the Geothermal Power Plant in Sector 3 under Adam's command."

After credits
"Following the incident, the Federation has been searching everywhere within the BOTTLE SHIP, but he still hasn't been found."

In the Japanese version, his name was simply Keiji which was a Japanese name that was pronounced the same as "K.G." It was unknown whether there was a correlation between the two or whether the similarity was a coincidence.

K.G.'s surname was originally Wong.[2][3][4] His final surname "Misawa" is a possible tribute to the Japanese professional wrestling legend, Mitsuharu Misawa, who died while the game was near the end of development. 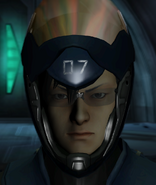 K.G.'s frozen body being thrown in the lava by the Deleter.

Portrait shown in the Characters menu.