Insects discharge from the hive to attack once the hive is fired upon.

Any projectile weapon
The Kago[1] (カーゴ?)[2] is a species of small insectoid creatures that coexist with each other within large hives, which are caged inside a web of hardened biomatter known as Kago's nest (カーゴの巣?)[3]. They don't actively cause any damage if their hives are left alone, but if fired on, individuals are expelled to defend their homes.

Kagos are first seen in Crateria, but are also found later on in Norfair. They appear as a green cage with glowing red biomass inside. The Kago colony can be destroyed if the nest is shot enough times, and when shot members of the colony will jump out and surround it, hopping around back and forth. Remarkably, Kago hives will violently shake the rooms in which they are found with every hit they take from Samus's weapons, suggesting these structures are strongly fixed to the ground. These can be used to collect energy and weapons, and do little damage in themselves as well. They are of very little threat to Samus, only becoming dangerous if large numbers of them are released.

In Sector 2, Sector 4, and Sector 5 of the Biologic Space Laboratories research station, there lies an infected version and/or a mimicked variant of Kago[2], both caused by the X Parasites. The nest has a shiny green web cage, and the Kagos within now glow with a slight purple tint. When another free-floating X merges with one of these Kago's nests, it mutates even further, tripling in size and transforming into a towering purple cage with glowing green, pulsating insides. This form is vulnerable to both the Screw Attack and Shinespark. They often block off certain areas, but can also be used by Samus if frozen to become very useful platforms.

None of the Kagos come out when their X-infected nest is fired on. While Kago insects do not spawn from their cage, they are fully programmed as enemies, and unused sprites exist within the game's code. They have no code allowing them to escape their cage. [1]

BLOW THE HIVE
"Stand back a bit and rapidly shoot the pulsating hive until it blows up. Don't move on until you dust off all of the tiny enemies, though." 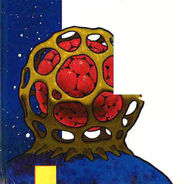 Official artwork of a Kago's nest.

Kago spawns programmed back into Fusion.
Add a photo to this gallery

Retrieved from "https://metroid.fandom.com/wiki/Kago?oldid=259449"
Community content is available under CC-BY-SA unless otherwise noted.