All Metroid tracks are on side B of the single. Notably, the "uplifting" portion of the Escape theme, which is present in the Western NES version of Metroid but absent in the Famicom Disk System version, is included in the single's arrangement. Brinstar Depths, Norfair, Ridley's Chamber, Silence, Tourian, and Zebetite are not included with this single. 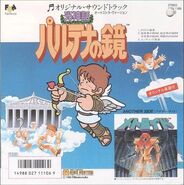 Side A, Kid Icarus.

Retrieved from "https://metroid.fandom.com/wiki/Kid_Icarus_/_Metroid_Original_Soundtrack_Orchestra_Version?oldid=253924"
Community content is available under CC-BY-SA unless otherwise noted.