A Kinetic Orb Cannon is Xenotech designed to launch unseen spherical shaped objects called Kinetic Orbs across long distances. They are predominately found on planet Aether, and on SkyTown of planet Elysia. In the latter location, some Kinetic Orb Cannons need to have power restored to them by entering them and using the Boost Ball to generate charge, causing the cannon to turn to its correct direction. The original purpose of these units is shrouded in mystery, although it is possible they were either a method of transporting goods, (albeit rather sturdy ones) or even a form of weapon. In the present day, Samus Aran can use the cannons to launch herself across distances using her Morph Ball form. She will often be fired at Kinetic Orb targets.

Morph Ball launchers, devices very similar in function, appear in Metroid: Zero Mission, Metroid: Other M and Metroid Dread. Morph Ball launchers send the Morph Ball upwards at speeds that can break any blocks, including the otherwise one-way-only Pit Blocks. Other similar cannons can be found in Metroid Prime Hunters and Metroid Prime Hunters: First Hunt, including Jump Pads that do not require the Morph Ball mode, but function more like springs.

If another person touches the cannon while it is preparing to fire a target, the person who touches it will die. This is observed in the Metroid Prime 2: Echoes Multiplayer, where Kinetic Orb Cannons are placed on various multiplayer levels such as Sidehopper Station. If two cannons are positioned opposite from each other, and two people use them at the same time, the two objects or people being fired will collide and explode. This can kill a participant even in Invincible Mode.

The purpose of the Kinetic Orb Cannon is unclear. It may have originally been designed for industrial use, then converted to a combat system in later times. 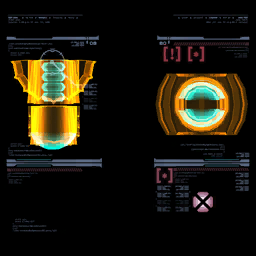 The Kinetic orb Cannon's original purpose is unclear, but they are capable of firing spherical objects at high speeds to a set target. Entering a cannon while in Morph Ball will allow you to reach new areas and traverse great distances quickly. The Kinetic Orb Cannon appears in various locations at SkyTown. However, most units have shut down and require a kinetic charge to reactivate.

A Kinetic Orb Cannon. Users must enter a sphere into the hologram to launch the cannon.

Samus enters an Orb Cannon in the Temple Grounds...

...and it fires her to the other end of the room.

Samus is fired from another Orb Cannon in the Temple Grounds.

A safety shield on SkyTown. Deployed during Orb transport.

A special "bow" variety of Cannon on SkyTown.
Español
Community content is available under CC-BY-SA unless otherwise noted.
Advertisement