For the character, see List of characters in the Super Smash Bros. series.

Kirby is a series of video games developed and published by Nintendo, centering around a pink, spherical character of the same name who defends his home planet, Pop Star, from those who would do it harm.

The Kirby franchise has had several crossovers with the Metroid series within its own games. Kirby and Samus Aran have appeared in every Super Smash Bros. series game to date together. Kirby is able to use his signature Inhale ability on Samus and Zero Suit Samus, and copy their Charge Shot and Paralyzer moves, respectively. When Kirby Inhales Samus or Dark Samus, their helmets will appear over his body; when Zero Suit Samus is inhaled, Kirby gains her ponytail, and when Ridley is inhaled, Kirby wears a Ridley hat.

Aside from references to Metroid in the Kirby franchise, there was at least one reference to Kirby in the Metroid franchise: The Shaktool's design in Super Metroid, and to a certain extent its capabilities, were similar to the Kirby enemy Heavy Mole.

When Kirby uses his Stone ability, he may randomly become a statue of Samus (although this is very rare). The Samus statue features her making her iconic Metroid II: Return of Samus and Metroid: Samus Returns crouching cover pose. Also, the Screw Attack (called the "Screwball") is a treasure in the Great Cave Offense segment of the game. In Ultra, the remake of the original game, the Samus statue and Screw Attack (now named correctly) are retained.

Stage 2, room 3 of the Iceberg level in this game features a magma-filled room containing six Metroid larvae as enemies. The Metroids cannot inhaled by Kirby, but if he eliminates all of them using Ice, Samus Aran will appear unmasked at the end of the level, and give Kirby a Heart Star (or a 1up if this has already been obtained). If Kirby does not defeat the Metroids, Samus will have her helmet on and will not give Kirby anything. The Metroids being vulnerable to the Ice power is a reference to their weakness in the Metroid series; cold temperatures (usually the Ice Beam). Samus removing her helmet is a reference to the better endings of Metroid games in which she removes her helmet and/or Power Suit if certain requirements are met.

The Japanese strategy guide for Metroid: Other M features a timeline of Metroid releases and related games, including Kirby's Dream Land 3.

Samus in the Kirby Series
"Kirby, who can inhale and copy anything... A well-known series in which Samus has appeared repeatedly. In Kirby Super Star, she appears as a stone statue that Kirby can transform into. In the remake, Ultra Super Deluxe, she appears yet again. In Kirby 3 stage 5-2, Metroids appear as enemies. Samus waits at the goal."

Super Famicom "Kirby 3"
"If you eliminate all the Metroids in level 5-2, Samus reveals her face."

An official Kirby's Dream Land 3 yonkoma comic features a cameo from Samus Aran, referencing her cameo in the game with unmasked Samus thanking Kirby for beating the Metroids. Kirby compares Samus to Ado, noting that they are both humans but look very different, with Samus having more realistic anatomy and proportions than Ado. Ado claims that it is the difference between adults and children, although her portrait of herself as an adult is still much more cartoony than Samus.[1]

Aside from Kirby and Samus appearing together as playable characters in the game as well as trophies for both series being accessible, the Adventure Mode transition cutscene after the escape level depicts the (destroyed) Zebes as neighboring Pop Star, Kirby's home planet from the Kirby franchise.

Super Smash Bros. for Nintendo 3DS and Wii U[]

Although there's nothing directly linking them in the game itself beyond both being playable characters in the game, Kirby and Samus did appear in their NES sprites for Kirby's Adventure and Metroid, respectively in Pac-Man's teaser poster, with Kirby in particular using his suction ability to suck in various dots in the Pac-Maze and Samus fleeing from Pinky. Similarly, Kirby and Zero Suit Samus from the same game appeared in Ryu's reveal artwork. The two also appeared in Charizard/Greninja's announce trailer as well as Bowser Jr.'s announce trailer, both times fighting against at least one of the focused-on characters. The two also appeared as silhouettes in Wii Fit Trainer's announce poster, as well as appeared in Mega Man's announce poster.

In Spirit Battles, the X Parasite Spirit uses Kirby (in his yellow "Keeby" alternate costume) as a Puppet Fighter. This is most likely due to both characters being blob-like beings that consume other creatures and copy their abilities. 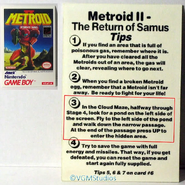 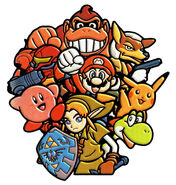 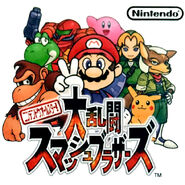 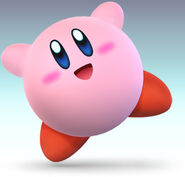 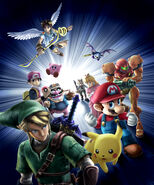 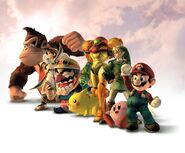 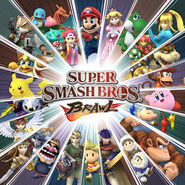 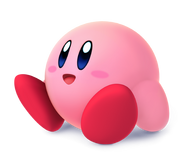 Samus and Kirby appear together in Greninja’s reveal trailer. 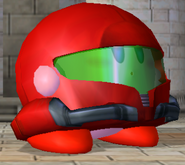 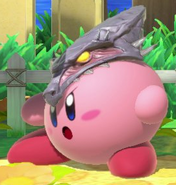