This article is about the larval form. For the adult form, see Imago.

Access to Ridley's Lair
Kiru Giru (キル · ギル?)[1], also known as giant larvae[2], are the larval form of the insect Imago, and are native to the Norfair region of planet Zebes. One serves as the fifth boss Samus Aran fights in Metroid: Zero Mission.

Hatching from small, pink-white eggs, at full size the Kiru Giru is roughly four times as large as a human. Its segmented, sloped body ranges from blue-green to purple, and features several round nodes running its length, which may serve defensive purposes. Most of its body is invulnerable to attack, save for its bright orange underbelly. While normally sluggish, the Kiru Giru can attack with surprising speed when threatened, using the small legs toward the front of its body to charge at enemies.

When the time comes for it to mature into its Imago form, the Kiru Giru will enter a grey, stringy chrysalis and rapidly metamorphose; within minutes, it is a full-grown adult, and capable of laying eggs.

Samus Aran encountered four Kiru Giru specimens while travelling through Norfair. The first two larvae were free-roaming, and had to be destroyed by using the newly-acquired Wave Beam and several Morph Ball Bombs, respectively.

Later on, she encountered the long-dead corpse of a third larva, in a corridor infested by carnivorous Tangle Vines. It appeared to have been one of the many creatures to have fallen prey to the vines, which had pierced and devoured its flesh from within.

The final Kiru Giru she encountered had been similarly ensnared, and was in the process of being consumed by the vines. However, this one was still alive, and attacked Samus by firing projectiles from its nodes. The only way for Samus to free the larva was to destroy the Tangle Vines tethering it to the ceiling. When the last vine was destroyed, the Kiru Giru plummeted through the floor, where it began to tunnel downward and formed a coccoon around itself. Shortly afterward, it emerged as the Imago, and immediately began to make its nest in its hideout.

The first two Kiru Giru are encountered in the same room, impeding Samus' progress. Only a layer of stone stands between Samus and the weak point of the first one, and it can be destroyed with just a few shots from the Wave Beam. The second one will actively attempt to charge Samus, but can be driven back by Missiles in a manner similar to Crocomire's fight in Super Metroid. To destroy it, Samus must lay Bombs while the larva is attacking, so that they detonate while the Kiru Giru is on top of them.

The ensnared Kiru Giru is trapped in a curled-up position, hiding its weak spot. To defeat it, Samus must freeze a Winged Ripper flying about the room, jump on it, and shoot the vines that are holding the larva with Missiles; however, it is possible to defeat it without using the Ripper by jumping up and shooting diagonally. Spores are constantly launched from the larva, either as a result of interior decay caused by vines or the latter attempting to reproduce. As Samus destroys the vines, the larva slowly changes from grey to its natural colors (possibly because the vines were absorbing its blood). When defeated, the larva itself will fall through the floor, opening a path for Samus to exit the chamber. An interesting thing to note is that the winged Ripper can be killed if it is directly underneath the Larva the moment it falls, thus crushing it.

The larva falls into the floor.

The freed larva in its cocoon. 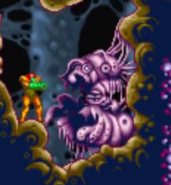 The Kiru Giru on the Metroid Zero Mission Official Site.