Chest and tail (both when exposed)

A Korakk Beast is a four-legged species that are used by the Space Pirates as mounts during battle. The Korakk and Pirate Hussar share an unusual bond; if the Hussar is killed, the Korakk will seek to avenge the rider's death.

The homeworld of the Korakk Beast is unknown, though it is possible that they are native to the Space Pirate Homeworld and was kept from going extinct (like the Badger Glove, if it too originates there) for military uses.

Korakks are large creatures, insectoid in appearance. They have long back legs that enable them to stand bipedally for brief periods. Their fore-limbs are blade-like and bent, and make perfect weapons for attack. Korakks have a strong carapace that repels most Beam weaponry, and a sharp horn located at the head for attack and defence, along with two other horns on the jaw. Pirates also attach Phazite plating on the skull region for further protection from attacks. Korakks have no visible eyes, although they may be hidden underneath their Phazite armour.

Likely a result of Phazon corruption, Korakks have the ability to produce Phazon bursts from their feet and tongue, often projected from the mouth as a damaging mist. They can also launch their tougue from the mouth at high speeds up to several meters in distance; they will use this to ensnare foes or prey. The Korakk Beast's tail contains nerve clusters susceptible to physical stress, if enough stress occurs the creature will rear up in pain, exposing the vulnerable belly. Sensitive nerves in the mouth and tongue tip are also targets for attack. Damage to these points will induce a state of dizziness that will temporarily incapacitate the Korakk Beast.

One Korakk Beast, ridden by a Pirate Hussar, appears in the Jousting Field in Bryyo Thorn Jungle after Samus has defeated two Aerotroopers. The Korakk can be killed before the Hussar itself, but it is somewhat difficult because both it and its beast will continue to attack Samus, and the Pirate both makes the battle more difficult and presents a constantly-exposed target. However, killing the Korakk Beast first will result in the deaths of both enemies. The Korakk can ensnare Samus in its tongue and deal a moderate amount of damage, as well as pounce on its target from close and medium range. After the rider has been killed, the Korakk must be stunned by hitting its tongue. Then, Samus must use the Morph Ball to go in between its legs and attack with Morph Ball Bombs near the Korakk's belly. After doing this 2-3 times the Korakk will topple over and extend its tail, which Samus can pull with the Grapple Lasso. This will cause the Korakk to rear onto its hindlegs in pain, exposing its vulnerable belly to Beam attacks. 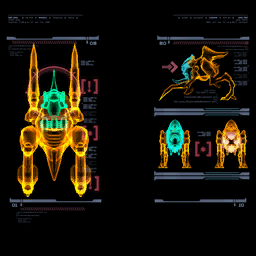 Korakks are prized by the Space Pirates, who use them as cavalry mounts. Their belly is occasionally vulnerable, but guarded from all sides. Finding a way to get underneath it and attacking would be effective. Nerve ending in the tail can be stressed through grappling, but only when the tail is extended. The interior of a Korakk's mouth, as well as the tip of their tongue, contains sensitive nerve clusters. Attacking these points could temporarily incapacitate the creature. They can emit Phazon energy through their feet and tongue. The Phazite armor they wear will repel most damage.

Official art of the Korakk and its rider.

The Korakk appears on a cliff.

The Korakk Beast turns around.

The dazed Korakk's under belly regions is vunerable to the Morph Ball Bomb.

Samus uses the Grapple Lasso to damage the Korakk's tail.

The Korakk rears up, exposing its soft belly.

The Korakk's innards, seen with the X-Ray visor via cheating.

The word "Korakk" written on a whiteboard at Retro Studios.
Español Русский
Community content is available under CC-BY-SA unless otherwise noted.
Advertisement