The Korba is a creature native to Bryyo. Korbas have a unique symbiotic relationship with the Snatcher: Snatchers levitate food up to the Korba to feed it; anything the Korba cannot eat will be thrown back to the Snatchers for them to eat. It appears to be a giant worm-like creature that embeds itself in a wall or rock formation and waits for food to come its way. 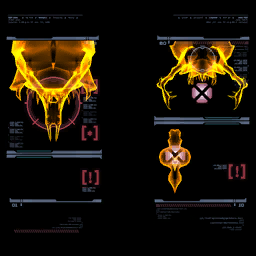 The Korba is a vicious, resilient bioform. It prefers to lurk above its hunting grounds, waiting for prey. The Korba relies on the smaller Snatchers to levitate victims to a point where the Korba can devour them. What the Korba cannot digest, it expels to feed the Snatchers. This symbiotic relationship works well for both Korba and Snatchers.

"This Korba creature was originally just the mouth that would grab you when you get too close. Danny Richardson created the original creature. Using his textures, I added the thick slug body embedded in the cross section here. I liked the idea of an enemy like this, who does not move away or die, to be heavily incorporated into the environment around him, like some sort of worm that buries himself and waits for hundreds of years, as food occasionally passes through."

Español
Community content is available under CC-BY-SA unless otherwise noted.