"Kraid's room access" is a room in Kraid's Lair/Kraid. It appears, with differences between versions, in Metroid and Metroid: Zero Mission. A separate version of this room appears in Super Metroid.

In Metroid, this room is a small chamber with a blue bridge over a pool of acid. Geegas spawn endlessly from the acid, providing an opportunity for Samus to replenish her energy and Missile Ammo by shooting them. The ceiling consists of green tiles, with two red orbs and twelve downward spikes arranged to resemble a creature's maw. A similar face appears in "Mini-Kraid's room" in Super Metroid, and in the room preceding Kraid's new chamber in Metroid Dread[1]. Samus can get into this room quicker by laying a Bomb in the floor of the "hidden drop", which will

In Zero Mission, the room has been slightly enlarged vertically, and shrunken in width. Its floor and ceiling now have a slight incline beside each door, but the room retains its bridge over acid and green architecture. A Gadora now guards the entrance to Kraid's room, and must be killed to access the boss. Geegas no longer spawn here, and the entrance from the "hidden drop" has been removed, since that room now leads into the slope beside this one. When Samus defeats Kraid, she has the option to collect the Speed Booster and use it to run back through a lower passage in this room, breaking through a wall of Boost Blocks in the slope room. If she does not collect the Booster, she can still use this path, but will need to find a hidden tunnel in the ceiling above the Boost Blocks.

In Super Metroid, another room that serves the same purpose as the original appears in Brinstar, while the original Kraid's Lair is no longer accessible. It is now a corridor consisting of green and metallic tiles, with spikes lining parts of the ceiling and floor. A single Air Hole is present, spawning Zebs endlessly. As Samus approaches the right, projectiles will begin to fire from the right and she will come upon a mysterious corpse, the nature of which has been subject to speculation. Sbugs can be found feeding on the corpse, which will scurry away when Samus approaches them, but return on subsequent visits, making this the only room where they can be encountered multiple times. The door into Kraid's room is covered by a Gadora, which may have killed the bioform Samus encountered. Before she proceeds into Kraid's chamber, Samus can shoot part of the ceiling near the entrance to find a hidden chamber with Energy and Missile Recharge stations. 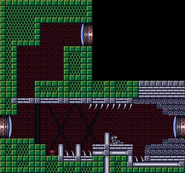