"Kraid entrance shaft" is the first room in Kraid's Lair. It appears in Metroid and Metroid: Zero Mission.

In both games, this is a tall vertical shaft that acts as a hub area for Kraid's Lair, connecting to multiple different corridors via Blue and Red Hatches on the left and right. In the lower center of the room is a vertical rectangular midair block, and at its bottom is a small wall standing before a door on the right.

In Metroid, the room is constructed out of white blocks that appear to be comprised of bricks, which are held together by rock-like black blocks, and lined with small green bushes. Along the shaft are two midair platforms and at least two ledges on either wall. The barrier at the bottom of the room has a hanging pillar in front of it. It can be ascended from the other way with Bomb Jumps. Should Samus fall to the bottom of the shaft, she can ascend it by strategically freezing Rippers along the lower shaft and using them as platforms.

In Zero Mission, the room is somewhat shorter owing to the Game Boy Advance's smaller screen, but has not been changed much. Its walls are now a dull blue-gray and silver, with each block still comprised of multiple bricks. The background depicts ancient ruins, presumably Chozo. The bushes lining the walls are thicker and appear to have pustules. There are now more midair platforms, and a fake floor of blocks (colored blue) exist under the midair rectangular block; the floor can be destroyed.

Additionally, the wall at the bottom of the room is much taller and has steps on its right side. Given the game's addition of the Turbo Bomb and Power Grip techniques, it is now easier to climb over the wall. When Samus leaves Kraid's Lair after defeating its namesake, a cutscene plays showing Ridley aboard the Space Pirate Mother Ship glaring as the ship lands on Zebes.

In Super Metroid, this room is no longer accessible, although a similar statue to that in the elevator to this room appears in Brinstar, which Kraid's area is now a part of.

IMPOSSIBLE PASSAGES? (pg. 43)
"To get over these pipes in the narrow space available, Samus must be in Round Ball form. Use the bombs repeatedly to blow Samus up to the top gap, then move to the right. It's difficult to time the bombs correctly."

014 FREEZE AND HOP (pg. 131)
"If you're equipped with the Ice Beam, you can climb up the shaft in the middle of the hideout. Freeze the invincible Rippers that fly to the left and right, and use them as platforms. Timing is crucial - if you wait too long to jump, your platform will thaw and you'll tumble to the ground."

This passage is also present in the Zero Mission guide (see below).

103 EXPLORE THE CENTRAL SECTION (pg. 50)
"When you return to the main shaft, you could leave the lair, but there are more items to be found. Drop to the bottom of the shaft, destroying blue-tinted blocks along the way."

RIDLEY GETS THE CALL (pg. 50)
"As you ride the elevator out of Kraid's lair, you'll witness a cut scene that shows Ridley's arrival - one guardian down, one to go."

010 IMMEDIATE MISSILES (pg. 108)
"As soon as you land in Kraid's lair, drop to two hatches and use your missiles to open the hatch on the right, hop across a series of narrow platforms and collect a Missile Tank. You'll need extra firepower for your battle against Kraid." 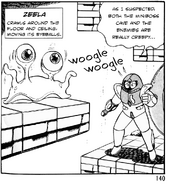