This article is about the location from Super Metroid. For other uses, see Lab (Disambiguation).

Place of study for the baby

The lab[1] was a laboratory for biological studies at the Space Science Academy on Ceres.

The lab features a containment tube, Bioreactor System and computers in the center of the room, and more computer monitors extending into the background.

The lab was where the baby was contained for study by the scientists when Samus brought it to them, having spared its life on SR388. After Ridley seizes the baby from the station, Samus finds its large containment tube broken and three dead scientists on the ground. Shortly afterward, the lab is destroyed following the Ceres Space Colony's countdown.

The lab is also depicted on the Super Metroid Title Screen. While the scientist bodies are still on the floor, the baby is stored in its capsule, seemingly undisturbed. 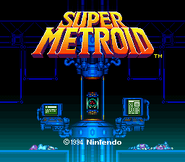