Wikitroid
Register
Don't have an account?
Sign In
Advertisement
in: Pages with sourced titles, Rooms, Crateria,
and 2 more

The Landing Site[1] is a significant room in Crateria. It made its first appearance in Super Metroid, although chronologically it is first seen in Metroid: Zero Mission.

The Landing Site is a rocky, mountainous area on the surface of Crateria. Samus Aran lands her Starship on a relatively flat area of the ground, between two high cliff walls. The Starship functions as both a Save Station and Recharge Station while landed here.

The geography is altered slightly between the two games, but remains very similar. Directly to the right of the Starship is a raised portion of ground, which is much higher in Super Metroid and has a barrier of destructible blocks creating a passage through the bottom. The right cliff wall of the Landing Site has long ledges outcropping towards the left, while the left cliff wall contains a network of caves, most notably including the rocky cave. Although no creatures inhabit the Landing Site, some vegetation can be seen growing on the rock. At different points during the Zero Mission and Raid on Planet Zebes, the Landing Site is doused with Acid Rain during a Craterian thunderstorm.

In Super Metroid, Samus lands her Starship once again at the same Landing Site after the destruction of Ceres Space Colony. Unlike Zero Mission, Samus is able to explore the Landing Site as soon as she touches down, although the current state of her Power Suit means that she can ultimately only go left into the rocky cave. As she acquires more power-ups, she can return to the Landing Site, which provides a hub for different areas of Crateria: "The Gauntlet" to the upper left, and Brinstar and the flooded cavern to the right. Just like in Zero Mission, after a Time Bomb has been set in the new Tourian, Samus returns to the Landing Site through the rocky cave; the entire area is given a red/purple tint, with pockets of steam erupting from the ground. The gameplay concludes as soon as Samus reenters her Starship.

Power Bomb Tank
In Zero Mission, after returning from Chozodia, Samus must launch a diagonal Ball Spark from the raised portion of ground. If aimed correctly, it will break through Boost Blocks in the left wall, revealing a hole where the Power Bomb Tank can be found. She will then need to use a Power Bomb to break through Power Bomb Blocks and reach the tank.

Crateria Area A (pg. 28)
"Bounty hunter Samus Aran is greeted by the torrential rains of the Planet Zebes when she hits terra firma at Crateria. The planet's surface is very cold, but she's oblivious to that fact while in the confines of her Power Suit."

A. HIDDEN PASSAGE (pg. 28)
"Super Jump at an angle to break the rocks that block this passage, then Bomb through the rest of them to proceed. You can Turbo Bomb up to the area, too."

B. SAMUS ARAN'S SPACESHIP (pg. 28)
"This tough ship has seen many battles and will likely see many more. It serves as a haven for Samus. She can fully charge her Energy, Missiles and Bombs by entering the ship. No other place recharges Samus to this extent. It's also a Save location. It's always a good idea to Save your game here when you can."

C. HIGH ELEVATION JUMPING (pg. 29)
"Optimally, Samus will have the Space Jump before exploring the upper regions of Crateria. However, by using the Turbo Bomb technique, she can scout many of the areas without having use of the Space Jump."

D. BLAZING THROUGH WALLS (pg. 29)
"Instead of wasting a lot of time bombing through all of the rocks that form this barrier, Samus can use the power of the Speed Booster and just blaze right through them. This isn't the only area where this technique will be useful! Before sprinting, make sure that you leave enough room for Samus to get up to speed."

Zebes - A Visitor's Guide (pg. 13)
"The landing point for Samus; she'll dock her ship here before heading off into the great unknown. Samus can use the starship to re-energise and top up her missiles as well as save game data."

Area A (pg. 16)
"Samus arrives on the surface of Zebes amid the wind and rain of a fearsome Craterian thunderstorm. There's no time to waste, though, as at this very minute Mother Brain is plotting her evil machinations. The cliffs to the left are impassable at this point so go through the door on the right. Samus will return here later in her quest with the necessary items allowing her to pass into the higher reaches of this inhospitable section."

044 GET BACK TO SHIP SHAPE (pg. 38)
"After diving off the high ledge above the open area, you'll land on your ship. Since your mission is not complete, you won't be able to take off, but you will be able to restore your energy and missile supplies and save your progress."

211 BOOST AND BLAST OFF (pg. 76)
"Keep running to the right - don't stop. Your booster will charge and you'll blaze through a series of Speed Booster Blocks before you reach your ship. Climb aboard and reach for the atmosphere."

275 BURN THROUGH BLOCKS (pg. 89)
"Go back to the water's edge [in Crateria tube], turn around and run left, building up your Speed Booster. Kneel to stop at the rock formation, still charged. Leap over the formation, sprint left and drop off a small ledge. Tap the A Button, hold Left on the Control Pad and dash left through a rock wall."

The Blue Door leading to the rocky cave in Super Metroid

The barrier to the left of the Starship in Super Metroid 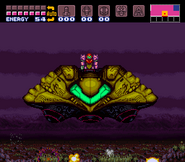 The Landing Site during Zebes's destruction in Super Metroid

The Landing Site in Super Metroid, as seen in SMILE. 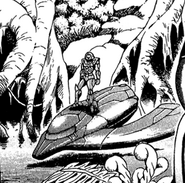 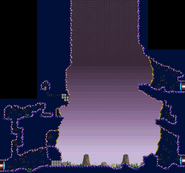