Allows Samus to go to Phaaze

The Leviathan Battleship was a Leviathan from Phaaze outfitted with technology by the Space Pirates onboard the Colossus who fell under Dark Samus’ control.

According to the Metroid Prime Trilogy art booklet and Space Pirate Data, some time after Dark Samus spontaneously left the Colossus, she encountered a Leviathan during her search for Phaaze. Once she infected it with her particular strain of Phazon, she had the creature open a Wormhole as a shortcut to reach her destination. After that, she took the Leviathan back to where she left the Colossus and ordered the Pirates to follow her through her second trip to Phaaze. After reaching the planet, the Colossus’ crew began installing cybernetic weapons, crew quarters and command consoles into the Leviathan and became their leader's flagship.

Samus Aran briefly visited this organic battleship in orbit around the Pirate Homeworld via a Warp Site on the planet to gain control of the vessel. If Samus boarded the Leviathan before having fully explored the G.F.S. Valhalla, she would learn from Aurora Unit 242 that a Pirate Code was needed to allow the Federation to gain access to the creature. 242 also advised her to investigate the Valhalla for any clues that are left behind by the Pirate raid. Once she acquired the code, she inserted them into the command console that was located in the creature's skull to gain control of the Leviathan.

Later on, this battleship was seen under the command by Fleet Admiral Castor Dane of the Galactic Federation, warping an entire fleet (including the G.F.S. Olympus) to Phaaze. It’s last act was to open a Wormhole which the Federation used to escape. However, the spacecraft was too slow to escape in time or was purposely left behind to be destroyed just as Phaaze exploded. The Leviathan Battleship was last seen disintegrating in the blast.

Leviathan Core
"Target appears to be a portion of the Leviathan's core. Invulnerable to all weaponry."

After entering codes
"Control codes entered. The Federation has gained control of the Leviathan."

Hologram in the Leviathan Access Portal depicting the Battleship's status

Console in front of the Battleship's Phazon Core.

The Leviathan Battleship with the Olympus in tow.

The Battleship and the fleet

The Battleship and fleet entered the Wormhole. 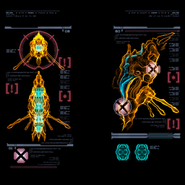