The Leviathan Infant is the embryonic form of the Leviathan. Infants are found in Leviathan wombs that support the creatures during their maturation, in deep caverns of the planet Phaaze. One such Infant was found by Samus Aran within the Genesis Chamber. Samus was successful in destroying the creature. Leviathan Infants feed on the constant supply of Phazon provided by the womb until they grow a Phazon Core. Over time, the Infant and its womb will rise to the planet's crust, by which time the Leviathan will be fully grown. Here they will be launched to corrupt other planets with Phazon. If under attack while in the womb, Infants will periodically shift to the other side to get away from the attacker. The Leviathan seems to be physically connected to the womb in that, when feeling pain, the womb will become agitated. If a Leviathan Infant is damaged sufficiently, it will cause a large explosion and destroy the womb along with it. This is due to the unstable nature of the Phazon they carry. 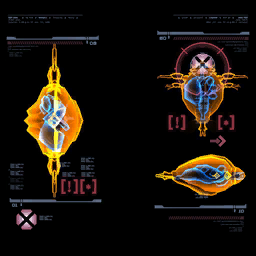 Morphology: Leviathan Infant
A Leviathan in early development.
Phazon within is highly unstable.

Leviathans are the children of Phaaze. They are bioforms that begin life deep within the planet, inside the base of a serpentine organ that serves as a womb. The Leviathan will remain in here, feeding on an endless supply of Phazon, until it has developed its Phazon core.
The developed core marks the Leviathan's transition into adolescence and its departure from the womb. The serpentine organ moves the adolescent from deep inside Phaaze and releases it closer to the planet's surface. Here the bioform will continue to grow and mature beneath its older siblings. As time passes and the older ones are launched into space, the Leviathan will slowly make its way to the planet's surface. It is here the Leviathan will reach full maturity. Once Phaaze has located a planetary target to corrupt, it will launch the Leviathan into space.
The Leviathan is capable of interstellar travel, creating wormholes in space to expedite the journey. Instinctively, it homes in on its planetary target. Shortly after impact, the bioform dies, leaving its armored shell to protect the Phazon core. Before it dies, the bioform often attracts and enthralls a large local predator. After mutating it through intense Phazon exposure, it compels the creature to protect the core. The core then begins to seep into the planet, replacing the local ecosystem with one based on Phazon.

An Infant in its serpentine womb.
Español
Community content is available under CC-BY-SA unless otherwise noted.
Advertisement