Lightbringers were bioforms created by the Luminoth for use in their war against the Ing. They are similar in appearance to clusters of crystals, and generate an energy field.

They behave like mobile Light Crystals and Light Beacons, as they can be energized like them, generating healing Safe Zones that move. Lightbringers are only found in a single room, Duelling Range, where they disappear after Samus defeats the Jump Guardian and collects the boots it drops; they were most likely destroyed by nearby Ing.

These artificial bioforms were one of the few Luminoth-created beings that never went rogue, never betrayed their masters and never fell under the service of the Ing. This is most likely due to the fact that since they generate a constant field of light around them that it would be impossible for an Ing to approach and so possess them.

Though they are only seen before Samus acquires any beam weapons on the planet, they have unique reactions to each, suggesting that they were intended to be further used in the game. This is also suggested in the creature's logbook entry. They can also be deactivated with Dark Beam (and then shattered with a missile), supercharged with Light Beam, and destroyed with the Annihilator Beam.[1][2]

Lightbringers can also be destroyed by a Power Bomb.

Lightbringers were created by the Luminoth for use in their war with the Ing. The crystalline creatures generate a field of life-giving energy at all times, and they can be energized like a Safe Zone Crystal. They are immune to most weapon fire: only a burst of matter-antimatter can destroy them. 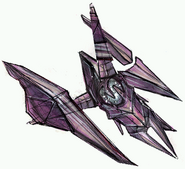 Possible early concept art.
Add a photo to this gallery
Retrieved from "https://metroid.fandom.com/wiki/Lightbringer?oldid=258824"
Community content is available under CC-BY-SA unless otherwise noted.