This is a list of official tweets (messages sent via Twitter) that pertain to Metroid and related games and media, from Nintendo, Retro Studios or other development companies. It does not include tweets from individual developers, which are documented on other articles.

"Yoshi? Metroid? Pikmin? If you could have any Nintendo creature as a pet, who would it be?"[2]

The First Look trailer for Prime 4 is attached to this tweet.

"#Metroid Prime 4 is now in development for #NintendoSwitch!"[4]

The Official Game Trailer for Samus Returns is attached to this tweet.

"#Metroid: Samus Returns brings back the feel of the classic adventures, but with improved graphics and new abilities! Coming 9/15 for #3DS!"[5] 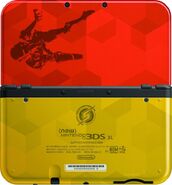 "Samus can wall jump for extra elevation. New to #Metroid: Samus Returns, she can hang from ledges and pull herself up from them as well."[7]

A clip of the Diggernaut is attached to this tweet.

A clip of the Queen Metroid is attached to this tweet.

"The mother of Metroids is a formidable foe in #Metroid: Samus Returns. Samus will need to think fast to defeat the ferocious Queen Metroid!"[9]

"Planet SR388 is a world of labyrinths, mysterious secrets, and a deadly #Metroid infestation. Samus Aran is the galaxy's only hope!"[10]

"The Ice Beam in #Metroid: Samus Returns allows her to temporarily freeze enemies in place. Frozen enemies can even be used as platforms."[12]

A gif of the Sequence Break in the corridor-connecting room this tweet mentions is attached.

"Use this handy trick to get the powerful Varia Suit upgrade early (no High Jump Boots required). Just make sure to bring at least 5 missiles to break open the item room door! Try it out for yourself with a #NintendoSwitchOnline membership. #NES"[13]

A gif of the Gravity Suit acquisition cutscene in Samus Returns is attached to this tweet.

"Witness the triumphs that made Samus Aran a legend in this video showcasing her past missions. See where her adventures will take her next in #Metroid: Samus Returns – available now. https://www.youtube.com/watch?v=3bxcbospvGo"[14]

"Uncover the evolution of Metroids on SR388 with this data file featuring Samus’ new weapons and upgrades in #Metroid: Samus Returns—out now."[15]

"New fighters are also coming to Super #SmashBrosUltimate! Splat your opponents with the Inkling, or smash your foes with the Space Pirate Ridley!"[16]

The Development Update video is attached to this tweet.

A clip of the Ridley battle on Ceres Space Colony is attached to this tweet.

"Did you know? If you’re able to do enough damage to Ridley, he’ll momentarily drop the Infant Metroid before leaving the Ceres Research Station.

"Back in Metroid: Zero Mission. She crawled. #SmashBros"[19]

Dark Samus's Character Showcase Video is attached to this tweet.

"Dark Samus joins Super #SmashBros Ultimate as Samus' Echo Fighter. It [sic] has floatier movement than Samus – and it [sic] doesn't roll when dodging or jumping. Its [sic] bombs and missiles look a little different, too. #Metroid"[22]

"The three-day #SmashBrosUltimate spirit event "Metroidmania" starts on 28/06! Check your Spirit Board, because #Metroid characters are coming out of the walls! Defeat them in battle to earn more SP than usual."[23]

"Coming out of the walls" references a line from Aliens.

"Happy #ReptileAwarenessDay! To celebrate, why not tell us who your favourite reptilian juggernaut is to fight against in #SuperMetroid, now available to play with #SuperNES – #NintendoSwitchOnline!"[24]

"For three days starting 28/05, #SmashBrosUltimate will highlight series that turn 35 in 2021! The latest event tourney will feature fighters, stages and items from these celebrated series."[25]

Check out the impressions of the players at Japan Expo, a video released by Nintendo, is attached to this tweet.

"On the eighth day of Christmas, Nintendo gave to me:

Ridley's Character Showcase Video is attached to this tweet.

"The Space Pirate Ridley joins Super Smash Bros. Ultimate from the Metroid series! He uses his long tail and sharp claws to strike down his foes. For his Final Smash, he unleashes a stream of fiery plasma at his opponent and Samus's starship."[30]

"Metroid Prime™ – Meta Ridley statue pre-orders are about to close! Be sure to place an order before 12 August 2020. After this time, you'll have to jump on the waitlist for a chance at owning this collectible. Don't miss out and guarantee yours today! https://f4f.group/MetaRidleyLastChanceWeek"[31]

"Join us for our Metroid Prime™: Samus Helmet statue launch stream! Set your reminders through the links below!

"And don’t forget to join our #GIVEAWAY for a chance to win a Metroid Prime™: Samus Helmet (Exclusive Edition) statue! Rules to the giveaway can be found here: https://f4f.fans/GMPSH

Translation
"[Tournament] From the 28th of May (Friday), for three days, the battle of the 35 year old series begins! A tournament with fighters, items, and stages limited to series that turn 35 in 2021; The Legend of Zelda, Metroid, Kid Icarus, Castlevania, and Dragon Quest"