Wikitroid
Register
Don't have an account?
Sign In
Advertisement
in: Featured articles, Articles with non-canonical information, Characters,
and 9 more
English

Cloned from Ridley between the events of Super Metroid and Metroid: Other M

Little Birdie (as known to the ringleaders on the BOTTLE SHIP) is a small organism seen in Metroid: Other M and is the larval stage of Ridley's life cycle.

Little Birdie has only been seen in the form of Ridley's clone, which was created from DNA found on Samus' armor prior to the game's events. Not knowing he was spawned by Ridley's DNA, the scientists thought he lacked potential as a bioweapon, and instead began treating him as their pet, giving him the nickname "Little Birdie" and keeping him in the Breeding Room in the Biosphere. Some time later, he was found playing dead in his cage and escaped after he brutally murdered the unfortunate scientist who discovered him.

Samus Aran first encounters Little Birdie after she leaves the Breeding Room, watching him as he tries to get on top of his favorite fruit in a lush jungle room. He scurries off after noticing Samus staring at him, but as she turns to walk away, he emerges from the brush and stares at her.

Later, a piercing screech is heard in the Kihunter nest, sending the surrounding Zeros into panic and enraging a swarm of Kihunters into protecting them and attacking Samus. After she defeats the hive, Little Birdie appears and begins feeding on the honey from the broken nest while roaring at Samus as she walks by.

After Samus battles the lizard-like Mystery Creature, Samus and the 07th Platoon find Lyle killed in action, covered in green blood. Samus follows the trail of blood, at the end of which she finds Little Birdie leaning against a transport vehicle. She nudges its body, which then causes it to fall over, revealing that it was only a shell that was recently shed. It can be assumed that, once Little Birdie outgrew his "shell" and molted into the Mystery Creature, he targeted and consumed Lyle.

Little Birdie demonstrates a high degree of intelligence when he plays dead to lure the Lab Worker into his cage so he can kill the researcher and escape. Later, he "uses" Samus to destroy the Kihunter hive, allowing him to harvest and consume the honey. This indicates that Ridley retains his capacity for critical thought even in his infant stage. Samus refers to Little Birdie as a "disgusting beast" due to his parasitic nature of using other creatures' strength to his advantage, and also by the way he greedily consumes the honey.

According to concept art Little Birdie would not be fed his favorite fruit by researchers in the Breeding Room, who only fed him smaller fruits as part of their study. This led to Little Birdie feeling dissatisfied,[2] presumably motivating him to break free and satisfy his voracious appetite.

It is unknown whether or not Ridley's clone remembered Samus. Interestingly, Little Birdie stared fixedly at her in the Biosphere, while both his adolescent and adult forms were strongly focused on attacking her. However, these may all have been instinctive responses.

Despite his small size, Little Birdie is able to produce a loud, piercing screech like his more mature forms. This provokes creatures, such as the Griptian and the Dragotix, to attack Samus as she explores the Biosphere. Whether the creatures were agitated by the screams or were perhaps understanding them as commands to attack Samus is unknown.

Page 166
"While seemingly marless like an adorable pet, Little Bird is a lethal creature. It turns into a ferocious beast when eating, and inside its mouth hidden by fur grow countless sharp fangs."

NTSC
"It may be hard to believe, but this is a younger version of the infamous Space Pirate Ridley. No matter how cute he is, don't think that you can love him and take him home-his next form is lizard-like with a sharp tail, and he has no problem turning his caring owner into a tasty snack!"

PAL
"Everyone knows Ridley as a terrifying evil space dragon, but would you have guessed he looked like this as a baby? He's kind of cute and creepy at the same time. Don't let his innocent act fool you into thinking he'd make a nice pet, though - once he sheds his skin and enters his reptile phase, you'll just become his next meal!"

Little Birdie is an unlockable Trophy in Super Smash Bros. for Wii U, along with the other two forms of Ridley's clone.

In Super Smash Bros. Ultimate, Little Birdie is an Advanced class Support Spirit. When equipped alongside a Primary Spirit with an available support slot, Little Birdie allows fighters to gain a stat boost after eating food, referencing Little Birdie's voracious appetite that fueled his metamorphosis into the Mystery Creature.

Little Birdie appears in the Final Battle of World of Light as one of the Spirits in Dharkon's army. He can also be unlocked through the Spirit Board. In his Spirit Battle, he uses Ridley (in his gold alternate costume) as a Puppet Fighter, referencing his true identity. The battle takes place on the Distant Planet stage, resembling the environment of the Biosphere where Little Birdie was studied aboard the BOTTLE SHIP. As a reference to Little Birdie's life cycle, Ridley initially begins the match at a tiny size, only to suddenly grow into a giant later in the battle, with his attack and defense increasing in tandem. Like all Support Spirits, Little Birdie does not usually have an assigned type, but he is treated as a Shield type during this battle.

Little Birdie trying to eat some kind of fruit.

Samus senses that something is watching her. 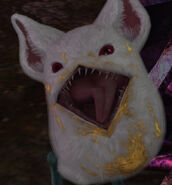 Little Birdie's husk, from which emerged the adolescent Ridley.