The "little girl" is an unnamed character that appeared in a Captain N: The Game Master comic, "Nervous Meltdown".

The N-Team come across Eggplant Wizard and King Hippo, who have accidentally infected Mother Brain with a computer virus that has also infected the Palace of Power. The only place where the antidote can be found is inside Mother Brain's mind. Using a shrinking technology, the N-Team and their ship are reduced to the size of a pebble, and enter the consciousness of Mother Brain.

When the N-Team become trapped in Mother Brain's mind, they encounter warped versions of themselves, which is how Mother sees them. They are suddenly saved by a blond woman - the "little girl" - the girl wielding a yellow pole and attacking warped perceptions of the N-Team. She points them towards a dark cave tunnel, where she claims the computer virus antidote is, and not a lit tunnel nearby.

After emerging from the tunnel with the antidote, the N-Team come across the "little girl" again, still fighting their dopplegangers. She encourages them to escape while she holds them off. Having realized that the girl is how Mother Brain sees herself, Kevin Keene develops sympathy for his nemesis and saves her from losing her life-sustaining liquid, believing that there is some good in even the most evil of people. He goes so far as to suggest that the girl would one day win the battle, turning Mother Brain herself good. However, this does not develop any further, and the N-Team returns to fighting against Mother Brain in subsequent issues of Captain N.

Her true name is not revealed, if she even has one. The N-Team tries to ask her name twice, and she responds both times with "Never mind!!" She is twice referred to as a "little girl" by Kevin, suggesting that she is a child. However, it is impossible to tell due to the woman never being drawn in great detail.

The woman has long blonde hair tied back into a ponytail with blue eyes not unlike Samus Aran. The ponytail loosens as the battle continues, and her hair is seen down when the N-Team emerge from the cave. This is also when her face is more clearly shown, although still not in great detail. She wears what appears to be a combination of a red halter top with a yellow smiley face on it, and shorts, with a tattered blue cloth tied around her waist. One strap of her shirt is ripped when she is last seen, and the rest of her clothing is torn.

The main antagonist of Metroid: Other M, MB, is another human representation of Mother Brain with blonde hair and blue eyes. Similar to "little girl", at least one character questions whether Mother is truly evil or was simply misunderstood. However, while "little girl" exists as Mother Brain's perception of herself, MB is a separate entity modeled after Mother Brain. It is unlikely that "little girl" served as a basis for MB. 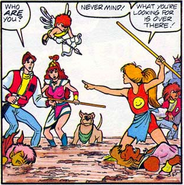 She points out the correct cave. 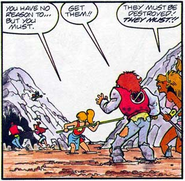 She tells the N-Team they must trust her.
Add a photo to this gallery
Retrieved from "https://metroid.fandom.com/wiki/Little_girl?oldid=269968"
Community content is available under CC-BY-SA unless otherwise noted.