Beam shots have screen-length range and a slight increase in power.

The Long Beam (ロングビーム, Rongu Bīmu?) is an upgrade that appears in Metroid and Metroid: Zero Mission.

In these games, Samus' basic Power Beam normally dissipates after a short distance. With the Long Beam equipped, however, her shots are capable of traveling much farther. This upgrade also slightly increases the strength of the Power Beam.

In Metroid, Samus can simply bypass the beam entirely, and in Zero Mission, it is possible to skip the acquisition of the Long Beam through an alternate, hidden route.

In other Metroid games, the Long Beam appears to have been completely merged with the Power Beam, as all shots are capable of travelling great lengths without the need for an upgrade. It is listed in the internal files of Super Metroid, but is not found in-game.[1]

"It lengthens the attacking range of your beam. It can also boost the range of the ice beam and the wave beam. Useful for attacking enemies from a distance."

"When you get this, your beam's range extends. You can combine it with the Ice Beam and Wave Beam."

"The range of the gun’s beam gets longer. You can destroy an enemy far away, as well as destroy enemies which come from the ceiling. Also, it is great in destroying walls and ceilings."

"Obtaining this power-up increases the range of Samus' beam weapon, including the Ice and Wave Beams. This power-up allows Samus to destroy enemies from a safe distance." 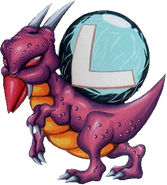