Cannot track agile targets
The Luminoth Turret is a turret created by the Luminoth. As their numbers dwindled in their fight against the Ing, they began creating machines to protect important areas. These turrets were often the first line of defense against attacks by the Ing. Although they are powerful, their targeting systems are lacking against agile targets. Samus Aran encounters these turrets in the Temple Grounds on planet Aether. They are stronger than most turrets, requiring her to fire three Missiles or several Charge Beam shots to destroy them, though a single Super Missile will destroy them.

In some ways, this turret is the equivalent of the Mega Turret in Metroid Prime.

As the number of Luminoth warriors dwindled, they turned to machines to protect key areas. Automated gun turrets were often the first line of defense against Ing attacks. Though powerful, they weren't nimble enough to deal with agile enemy targets. 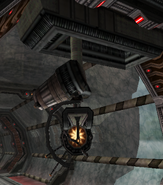