MB's hairclip was a gift given to MB by Dr. Madeline Bergman, the head of operations on the BOTTLE SHIP. Worn on the left side of her head, MB kept it even after she turned against the scientists of the station. When confronting Madeline and Samus Aran, it falls off of her head moments before she is frozen and killed by invading Federation Marines. It is then crushed by The Colonel as he steps on it.

The broken hair clip cannot be found on return visits to the control room. It is unknown if someone, likely Madeline, took it or if it was disposed of or destroyed along with the BOTTLE SHIP.

The ruined jewelry on the floor after the hairclip was stepped on by The Colonel. 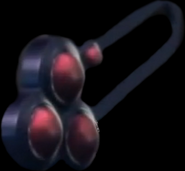 Hairclip render
Add a photo to this gallery
Retrieved from "https://metroid.fandom.com/wiki/MB%27s_hairclip?oldid=260215"
Community content is available under CC-BY-SA unless otherwise noted.