MODs[1] are items in Metroid Prime: Federation Force. They can be collected by the Federation Force from the environments, much like the power-ups that Samus Aran collects in the main Metroid games. However, MODs have the advantage of being used to customize the Mech to the soldier's choice, allowing them to define their role on the team as a healer or a warrior, or a "wizard". Samus's items are instantly equipped, and with the exception of Super Metroid, none of the Metroid games allow for customization of items. MODs can upgrade health or damage and grant other benefits, such as Freeze Shots lasting longer on enemies, or enemies exploding after being ignited. When collected, a MOD's benefit is kept secret until the end of a level, where a list of MODs is displayed and customization is enabled.[2] Some MODs are "unbreakable", such as Lone Wolf, while others are consumed after one use, such as Auto-Revive. MODs can also be broken by quitting missions. Some MODs have three levels of increasing benefits.

FINDERS KEEPERS
"You can often find Auxiliary Ammo and MODs in crates or hidden areas during missions, so keep your eyes open!"

"Find MODs while completing missions to build your arsenal of enhancements for your AUX ammo and your Mech."

A container housing a MOD in M14: Tremor. 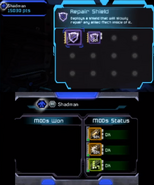 The screen at the end of a mission showing what MODs were won.
Add a photo to this gallery

Retrieved from "https://metroid.fandom.com/wiki/MOD?oldid=250581"
Community content is available under CC-BY-SA unless otherwise noted.