Magdollites[1][2] (マグドール星人, Magdoll?)[3] are a type of lifeform native to Norfair on Zebes and strange creatures that appear to be "living" columns of lava.

Normally they are found resting at the bottom of lava pools, in which their green eyes and teeth can be clearly seen. When something comes near it, the Magdollite will quickly submerge before stretching itself into a tall column of magma, equal in height to whatever it is preparing to attack, and it will then throw part of itself at its opponent. After its attack it will sink back to the pool of magma. These creatures can be frozen with the conjunction of the Ice Beam, and are vulnerable to Super Missiles.

The Magdollites encountered in Other M are vastly different in appearance. They now have arms which are used to swipe, and can shoot large molten rocks at Samus. They appear in the Pyrosphere alongside other familiar animals like the Mella and Dessgeega. Though it takes multiple Charge Beam blasts to kill them, Samus can instantly dispose of them after acquiring the Ice Beam by firing a charged shot at them and then shooting their frozen mouth with a Missile. When killed, they go down in flames, emitting roars. The Screw Attack will also kill them instantly.

In the endgame, it is revealed that when Ridley's clone pushed Anthony Higgs off a ledge, he fell above a Magdollite and froze it with his Freeze Gun, landed on the frozen area and slid on it to safety.

The art gallery shows that Magdollites have legs, teeth, and even a skeleton.

"Magdollites have the power to turn into magma and change shape at will. They attack by tossing lava."

"Appearing in magma, it shakes its arms to attack at Samus. It appears in very narrow scaffoldings, and will make Samus fall if attacked." 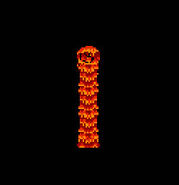 A Magdollite stretching in preparation for an attack

Gallery Mode
Add a photo to this gallery

Retrieved from "https://metroid.fandom.com/wiki/Magdollite?oldid=273821"
Community content is available under CC-BY-SA unless otherwise noted.