This article is about the area. For other uses, see Magmoor Caverns (Disambiguation).

The Magmoor Caverns (Lava Caves in the Japanese version) are a central area of Tallon IV (and extending northwest), neighboring the Phazon Mines to the southeast, the Tallon Overworld above and east, Chozo Ruins above and northeast, and the Phendrana Drifts above and southwest. It is not only geographically situated among all the areas that Samus visits in Metroid Prime, but also accessible from each -- except for the Impact Crater on its south, which is only accessible via the Overworld. The Caverns are very dangerous and flooded with magma, supporting such creatures as the eponymous Magmoors, Triclops, Puffers, Auto Defense Turrets, and even some Space Pirates. It is ironically the only area in the game that links to the Phendrana Drifts.

The Magmoor Caverns are, as a whole, long and narrow. There are only a few very large rooms, and most of it is subterranean, only three rooms being above the surface. Most of its rooms contain extreme heat, and thus, Samus needs the temperature protection offered by the Varia Suit to traverse through them safely. The magma found here is extremely dangerous, and if Samus falls in, it will harm her, regardless of her current suit. A minor Space Pirate base resides here, with a small amount of technology present in other areas, such as the Flame jet.

It extends from the Transport to Chozo Ruins to the Transport to Tallon Overworld. After the last elevator, it is impossible for Samus to continue before defeating Thardus and obtaining the Spider Ball.

Very few abilities are found in the Magmoor Caverns, the Plasma Beam and, ironically, the Ice Spreader being the only ones.

A corridor with lots of steam gushing out of vents.

Samus in a small magma-side tunnel.

Samus observes the sky outside the caverns. 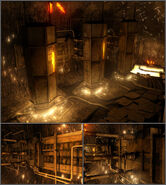 Danny Richardson
Add a photo to this gallery
Retrieved from "https://metroid.fandom.com/wiki/Magmoor_Caverns?oldid=272865"
Community content is available under CC-BY-SA unless otherwise noted.