The Main Reactor is a room in Agon Wastes. It appears in Metroid Prime 2: Echoes.

The Main Reactor is located in the Space Pirate mining facility on Aether. It is where the Pirates keep most of their Phazon. The Main Reactor is where Samus engages Dark Samus for the first time. Dark Samus is found absorbing the large Phazon crystal in the central Kellium energy reactor when Samus enters the room. During the ensuing battle, four of the surrounding tanks in the room are destroyed by Dark Samus's attacks, leaving patches of burning fire where they once stood.

After the battle, Dark Samus turns into Phazon particles and causes the covers of several tanks in the back of the rupture, exposing the Phazon within. The elevator in the room activates as well. To the left of the remaining tanks is a Spider Ball Track and a dead Luminoth, B-Stl. There is another Spider Ball track to the right of the former one that leads up above the tanks in the back of the room.

The Dark Aether version of this room is the Dark Oasis.

Missile Expansion
Samus must go up the Spider Ball Track that leads up above the tanks to the end of the track, and then use the Boost Ball to reach the tracks on the moving mechanisms above the tanks. Once Samus reaches the end, she must use a Bomb, Power Bomb, or a Missile on the hatch on the ground to destroy it. Inside is the Expansion.

B-Stl's Testament
"I can go no further. Here in this reactor, I go to join my fallen mate, J-Stl, in final rest. Though I die with honor, a shame falls on my house until the key I seek reaches its destination. May my brothers find my burden, that the way to the Sky Temple will be opened at last."

Stasis chamber
"Object scan complete.
Unit is in a sophisticated stasis chamber.
Xenotech designed to encase small objects in a stasis field.
Field is durable, but can be destroyed by explosives." 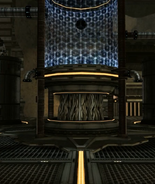 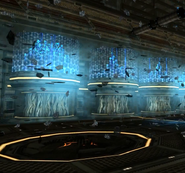