This article is about the device. For other uses, see Map Station (Disambiguation).

Map Stations are a type of station that provide Samus with a map of the nearby area that excludes any secret passages. Some Chozo Statues exhibit this ability as well, mainly in Metroid: Zero Mission. Map Stations, as well as a map in general, originated in Super Metroid, and were not present in Metroid or Metroid II: Return of Samus.

These stations also appear in Metroid: Zero Mission and the main three Prime series. In Metroid Fusion, the Navigation Room doubles as a Map Station. In Metroid: Other M, Navigation Booths act as Map Stations at certain points. There are no Map Stations or similar mechanic in Metroid Prime: Federation Force or Metroid: Samus Returns (a remake of Metroid II). In Federation Force, the map is pre-loaded; in Samus Returns, much of it can instead be revealed with the Scan Pulse.

MAP COMPUTER
"When Samus touches the map computer found in each area, you will be able to access the map data for that area. The areas that Samus has not been to are displayed in blue. There are some hidden areas that are not show [sic] on area maps."

Terminals (page 8)
"The game incorporates a helpful auto-mapping facility to stop you getting lost, a localized version of which is shown in the top right corner of the screen. To see the full map, press Start. Normally, this will only show the sections of the complex you've visited, but if you log onto a map computer, the entire map for the current area is displayed (apart from secret areas). Areas already visited are shown in pink, unexplored sections appear blue. When on the map, pressing the right button brings up the status screen. Location: All areas."

Map Computer (page 10)
"When Samus collects the map computer found in each area, she'll be able to access the entire map data. Note that not all the locations of an area are displayed..." 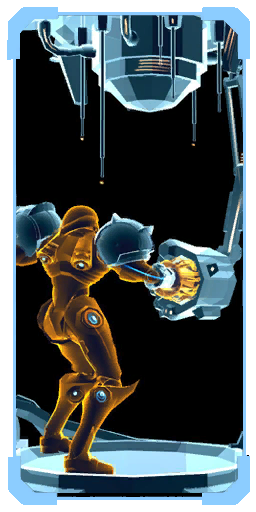 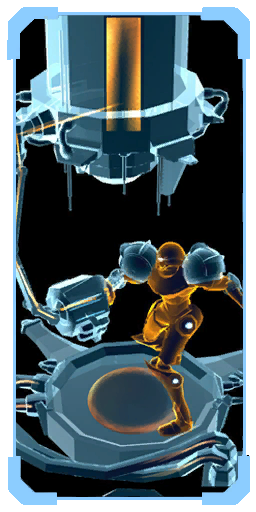 Walk into Map Station holograms to download a map of the area you're in.

A Map Station in Metroid Prime.

The Map Station in the Space Pirate Mother Ship from Metroid: Zero Mission.

A Navigation room in Metroid Fusion.
Add a photo to this gallery

Retrieved from "https://metroid.fandom.com/wiki/Map_Station?oldid=267685"
Community content is available under CC-BY-SA unless otherwise noted.