Super Metroid
Maridia (マリーディア Marīdia) is an aquatic area of Zebes. It is teeming with marine life, and is a thriving underwater ecosystem. It is very difficult for Samus to fully explore this area without acquisition of the Gravity Suit upgrade. It only appears in Super Metroid and is home to Botwoon and Draygon.

Note that these subsection names are purely conjectural, and are only used to emphasize difference between environments.

The base subsection of Maridia is connected directly to the most remote sections of Brinstar by a transparent glass tunnel, which can be shattered with a Power Bomb. There is a similar tube in Metroid: Zero Mission which requires the exact same method to destroy, required to get all items. This subsection is composed of the green-tinted stone characteristic of Brinstar, and various species of aquatic flora and fauna which also inhabit the surface of Crateria, near the entrance to the Wrecked Ship. The main atmospheric quality of this subsection is that the environment is very dark and very quiet. A small number of Space Pirates wearing special aquatic gear can be found here. Only a small amount of technology has been integrated into this environment, Space Pirate or otherwise, mainly consisting of a number of Powered Doors and a moderately high number of Grapple Points. This subsection connects directly to both of the other subsections of Maridia, and contains no major boss.

This subsection of Maridia has been heavily integrated with Space Pirate technology and artificial structures. It is a noticeable departure from the quiet and placid Base Maridia, and contains several species of highly dangerous organisms, some of which are artificial. The entire subsection is riddled with pits of quicksand, possibly created by an erosive effect brought on by the addition of a great deal of unnatural installation. Evidently, by the extensive integration of technology, the Space Pirates use this area as a base, most likely with Draygon as commander of the sector. The majority of the landscape is characterized by sand pits, artificial stonework, and rusting metal structures. Environmental hazards presented in this subsection of Maridia make the area highly difficult to navigate safely. Along with Draygon, Botwoon is also a boss present in this area. The Space Jump and Spring Ball are acquired in this subsection.

The environmental features of Upper Maridia are characterized by a landscape composed mainly of a Sandstone-like material, which is completely overgrown with hanging green foliage. This subsection of Maridia is distinguished by the fact that a great deal of it is located over water. Local wildlife inhabiting this area is also highly similar to that of the surface of Crateria, which links directly to this area through a passage only accessible by traveling through the Wrecked Ship. Two sub-areas of this section are divided between "Base Maridia" and "Sandy Maridia", but this is only distinguishable by change in music. The sub-area connected to Base Maridia has several hidden expansions and pickups, but does not contain any major bosses or upgrades. The sub-area connected to Sandy Maridia also contains several expansions and pickups, along with the Plasma Beam upgrade and a small number of Space Pirates, but also no major bosses. This subsection of Maridia is the smallest of the three areas.

Maridia's name could possibly be a reference to the Marid, which in Arabic folklore are water-based djinn, which fits the theme of the area (i.e. mostly flooded).

The name could also be derived from the Spanish and Portuguese word "mar", meaning "sea", which also fits with the theme of the area.

"The water world of Zebes is full of killer crustaceans and fierce fish."

Zebes - A Visitor's Guide (page 13)
"An ocean of problems face Samus in Maridia. Awash with all manner of deadly aliens, it'll take much exploration to escape from the watery confines."

Area A
"The watery domain of Maridia is almost totally unexplorable without the gravity suit but having come this far, you should have that invaluable item anyway. Even with the suit, though, it's still a daunting place."

"Not only does it boast the most devious map of all in the game, it's also riddled with long drops, nasty traps and numerous aquatic bad guys out to halt your progress. For this reason, you'll have to be systematic and try not to cut corners. Also, you'll need to make sure you're proficient in all the special techniques as they're all called for in the vast underwater caverns standing between Samus, Tourian and ultimate success. The quest is reaching a conclusion but the biggest tests are yet to come!"

Area B
"Samus' life doesn't exactly get easier the more she delves into the land of Maridia. The enemies multiply, the traps and obstacles become more devious, and the landscape more punishing. The key to survival is adaptability; she'll need to put her faith in her abilities."

Area C
"Not much for Samus to see here, but still plenty to do. She needs to stay alert at all times - Maridia isn't exactly the place you'd want to take a holdiay! [sic] Still, having come this far, the space adventurer shouldn't be too daunted by the horrors ahead. With most of the weapons now at her disposal, together with the vast experience gleaned from her previous journeys, Samus should soon be on her way to the final showdown."

Area D
"It's important for Samus to enter this area with sufficient bombs and energy at her disposal - without these, she has no chance of surviving the perils that are presented to her. There are certain items that will help, but she'll need to reach them first."

Metroid larvae were present in an unused room of Maridia in early Super Metroid footage. This suggests they were going to be encountered there at one point instead of Mochtroids.[1]

An in-game map of Maridia 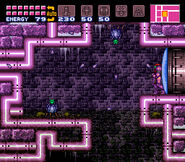 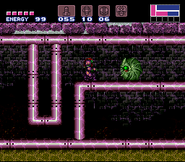 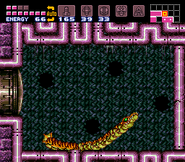 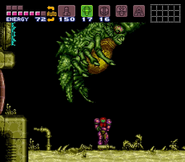