Wikitroid
Register
Don't have an account?
Sign In
Advertisement
in: Pages in the real-life POV, Articles in need of cleanup, Retro Studios employees,
and 2 more
English

Manchester, as a college student, would drive to his local Wal-Mart to play the in-store demo of Metroid Prime on Nintendo GameCube.[3] In July 2005, Manchester moved to Austin, Texas to work for Retro Studios.

Works of his in Metroid Prime 3: Corruption include Substations East and West, Gateway Hall, G.F.S. Theseus, North and South Jungle Halls, Fiery Airdock, Imperial Hall, Gel Processing Site, Main Lift, Main Docking Access, Powerworks, Concourse Ventilation, Main Docking Bay, Maintenance Shafts AU, CC, GP, OB and TR, Save Station B, Metroid Processing, Creche Transit, Phazon Quarry, Defense Access, and all Dioramas but the one depicting Meta Ridley. Some room features created by him include the celestial clocks, Zebetite-like tubes, Korba, ceremonial armor, and several backstories for features in rooms such as Metroid Processing and Imperial Hall. Some of these made it into the game, while most of it was scrapped.

Manchester implemented a Metroid larva in Donkey Kong Country: Tropical Freeze, in the underwater portion of level 4-3, Amiss Abyss. It was discovered four years after the game was first released, and he was happy to see it had finally been found.[4][5][6]

Super Metroid was a favorite game of his growing up.[7] 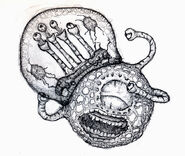 Produced (or shared) after Corruption.

Manchester's Metroid larva amiibo, in which he keeps his Wacom pen.[8]