A Meboid (メボー, Mebō?) is a small amoeba-like creature that is native to planet SR388.

In Return of Samus, Meboids are only found in a single room: the third tower corridor in Phase 4. These primitive creatures float in the air, mindlessly floating left and right in simple horizontal flight patterns. A Meboid will only harm Samus Aran if she comes into physical contact with one, and even then will only inflict minor damage.

In Samus Returns, Meboids now cluster together in large swarms that live in the underground lakes of Area 5. Moving as a group, they swim through the water in fixed routes. While they are not aggressive towards Samus, she will take heavy damage if she wanders into their path. She can easily destroy the entire swarm with the Beam Burst or Plasma Beam. Alternatively, she can pass through them without damage via the Lightning Armor.

"This is an amoeba-like creature. They just move back and forth."

Inhabitants & Eco System of SR388 (p. 19)
MEBOID
"Like other swarm-type enemies, Meboids don't actively attack you; they simply swim around watery areas in a fixed route. If you walk into their path, you'll take damage. Instead, hit them hard with your Lightning Armor melee attack to cut straight through the lot of them. This is an excellent way to replenish your supplies."

Walkthrough (p. 141)
MEBOID
"Meboids are another swarm type like Blob Swarms, Parabies, and Mumbos. These, however, are almost completely harmless. Like Mumbos, they fly back and forth around a specific area and only deal damage if you come into direct contact with them. The main difference between Meboids and the one-eyed Mumbos is that these are water creatures.
Rather than enemies, think of them as a great way to refill your resources. Turn on your Lightning Armor and use melee attacks to clear them quickly and reap the items they leave behind."

A Meboid sprite as it appears in Return of Samus

Meboids floating in Phase 4 in Return of Samus

A Meboid in the Metroid II gallery from Samus Returns 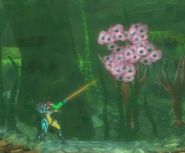 A swarm of Meboids underwater in Area 5 in Samus Returns
Add a photo to this gallery
Retrieved from "https://metroid.fandom.com/wiki/Meboid?oldid=268530"
Community content is available under CC-BY-SA unless otherwise noted.