MercurySteam, also known as Mercury Steam Entertainment, is a video game development studio based in San Sebastián de los Reyes, Spain. Founded by veterans of Rebel Act Studios and Konami, MercurySteam is best known for the Lords of Shadow games in the Castlevania series.

On December 22, 2020, it was announced that Nordisk Games in Copenhagen, Denmark had invested in MercurySteam and acquired 40% of the company. The announcement noted that MercurySteam is currently developing "several new titles". [1]

On November 30, 2021, Digital Bros., the parent company of 505 Games announced they were collaborating with MercurySteam on an original third-person action RPG, Project Iron (working title), to be released on multiple platforms.[2]

In 2015, it was reported that MercurySteam was actively interested in pitching a new Metroid game to Nintendo.[3] The pitch was unsuccessful, and a year after the story broke, MercurySteam vehemently denied they were working on such a game despite evidence to the contrary.

On June 15, 2021, it was announced that MercurySteam was developing the long-awaited Metroid Dread for Nintendo Switch. It released on October 8, 2021.[5]

Alpha Metroid and Samus cake created by Digital Development Management for MercurySteam to celebrate the release of Samus Returns.

The team with Larva Metroid cupcakes.

Developers on Dread with personalized hoodies.[6] 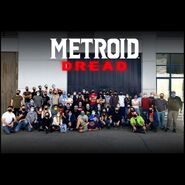 Alternate version without the characters.[8]