Wikitroid
Register
Don't have an account?
Sign In
Advertisement
in: Pages in the real-life POV, Unreleased Games, GCN

Metaforce, previously known only as "Action Adventure", was a canceled first-person (initially third) shooter game in development by Retro Studios from 1998-1999, which evolved into Metroid Prime. Jack Mathews publicly revealed the name Metaforce in 2018, which was repurposed as the codename for Prime.[1] Details about the game were unveiled in a 2022 interview with former developers by DidYouKnowGaming? on YouTube.[2]

The game was set in a futuristic, utopian society created through gene editing of the population. The protagonists of the game were Brynn, Miko and an unnamed[note 1] third woman, three metahumans who collectively formed the Metaforce. Each of them wore form-fitting space suits and had a different play style. Brynn was a cyborg who used firearms, Miko[3] was a ninja with psychic abilities, and the third woman was an assassin who used a rifle. The 30 hour story was told across three acts, each with its own antagonist.

In Act 1, the Metaforce faced a Luddite cult leader in India who led a race of mutants with four arms, each carrying weapons and serving as the cult's army in committing terrorist acts. Act 1 saw the cult bombing a convoy that was transporting a resurrected mammoth to a Jurassic Park-style zoo, releasing the mammoth. The Metaforce would have to combat the cult and the mammoth, which was on a rampage. In Act 2, the Metaforce pursued a Neo-Nazi eugenicist who sought to steal their DNA in order to create a master race of beautiful humans. Finally, in Act 3, the trio would confront a mind-controlling South African individual who was behind the preceding events, which were a distraction from his true plans.[2]

Other characters in the game included a guard with a barcode on his uniform, a "Ninja Monk" and "BloodMonkey".[4] An earlier source indicated that Metaforce was set on a post-apocalyptic planet in the near future.[5][6][7]

Following Shigeru Miyamoto's evaluation of Metaforce (see below), the story was significantly changed. In the new version, the protagonist was a female alien that the United States government had discovered in a crashed UFO. The alien had sonic abilities that allowed her to see through walls, and was recruited by the United States to defend it against another invading alien race.[2]

Over one thousand pages of design documents were created for Metaforce. The game's engine was heavily retooled as development went on. According to a source of EGM in 2001, two of the "hot chicks" had been modeled and concept artwork had been done, but little else.[7]> Nintendo enjoyed the game, but felt that three protagonists was too ambitious, so Miko and the third woman were cut, leaving Brynn as the sole heroine. Nintendo also requested the perspective be changed to first-person, because at the time they perceived third-person cameras as hard to implement.

Later, Shigeru Miyamoto visited Retro Studios and disliked Retro's other projects, but liked Metaforce. He suggested that Brynn was too generic of a main character and should be replaced with a more interesting one, leading her to be changed to an alien with the ability to see through walls. A thousand more pages of design documents were written to accommodate the change. Miyamoto then compared the invading alien race to Space Pirates and suggested that Retro Studios turn it into a Metroid game.[2] Retro staff agreed, and began to familiarize themselves with the Metroid franchise while also writing another thousand pages of design documents. Weeks prior to SpaceWorld 2000, they were granted the Metroid license and Metaforce was cancelled.[8] Very little of the original Metaforce is known to have survived, apart from concept artwork and tech demos, seen below.

According to Bryan Walker, Metaforce being "transformed" into Metroid Prime caused "turbulence" among Retro Studios staff, which he sought to address when he joined on for Metroid Prime 2: Echoes.[9]

Retro Studios staff associated with Metaforce include Mike Sneath, James Dargie and John Whitmore. The latter left Retro during early development of Metroid Prime, while the rest stayed on.

The artwork was drawn by Arnie Jorgensen, who left Retro just after the arrival of Andrew Jones.

The guard, who carries a baton filled with glowing green energy and has a barcode on his suit. 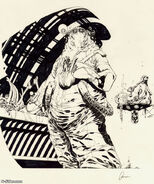 An alien creature using the remains of other creatures for some purpose.