Metarees succeed their Skree cousins in offense, defense, and speed. The metal armor lining the wings makes them invulnerable to all weapons except Super Missiles, the Screw Attack, or attacks from directly under it. At the same time, the streamlined sharp metal points at the tips of their wings give these creatures both a very powerful attack against many organisms, and a much faster dive-bombing velocity. Despite this, these creatures do not self-destruct like some of their cousins do; instead they always burrow into the ground, releasing damaging shrapnel in their surroundings as they use their pair of wings as a digging drill. These burrows can be observed under a Metaree's roosting site. When Samus kills them, they will explode and launch harmful shrapnel identical to the ones they release when they dig.

"Attack like the skree but can't be killed. Either freeze them with an ice blast or be ready to leap out of the way as they drop." 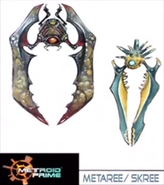 Early model.
Add a photo to this gallery

Retrieved from "https://metroid.fandom.com/wiki/Metaree?oldid=259774"
Community content is available under CC-BY-SA unless otherwise noted.