Wikitroid
Register
Don't have an account?
Sign In
Advertisement
in: Pages in the real-life POV, Websites
English

Metroid.jp is the official Japanese site for Metroid. Again as with Metroid.com it appears to have dropped the links to the 2D Metroid titles. Currently it is focusing on Metroid: Samus Returns.

The official site in 2003 featured both Metroid Prime and Metroid Fusion, spun off into their own separate sub-sites. The site hosted interviews with Yasuo Inoue, Tadashi Konan, Yoshio Sakamoto, Kenji Yamamoto and Kensuke Tanabe, Michael Mann, Mark Pacini and Karl Deckard, and Miyuki Miyabe. The Metroid Database unofficially translated the joint interview with Sakamoto, Yamamoto and Tanabe and released it on June 15, 2011[1], and Shinesparkers translated the rest of the interviews for release on February 26, 2021.[2]

In 2004, a website was created for Metroid: Zero Mission, and a second for Metroid Prime 2: Echoes. Both sites featured fan Q&As with Yoshio Sakamoto and the development team behind Echoes, answering fan questions about the Metroid series and the respective game. The Metroid Database released an unofficial English translation of the Zero Mission Q&A in December 2009, and Shinesparkers released a translation of the Echoes Q&A on February 24, 2018.[1]

At least three sites have doubled as flash games for Prime, Echoes and Corruption.

From 2009-2010, the site featured the Prime trilogy, and did not have Hunters or Pinball. Instead the website featured the New Play Control! Metroid games and Corruption. However, for all three there was a description link telling Samus's tales in each game. Below each link was another link to the game website. Finally, this page featured a teaser for "Another Side Story", which led to heavy fan speculation about a potential spinoff involving the Space Pirates. It later turned out to be a journal from the perspective of a Pirate, which was unofficially translated by the Metroid Database in May 2011.

On January 29, 2010, Metroid.jp was updated to feature an image from the Metroid: Other M trailer with the piece of piano music playing. The website later featured a remix of Theme of Samus Aran, Space Warrior, which was arranged by Kuniaki Haishima.

The Metroid Hub is a page on Nintendo.co.uk. It features links to several pages on the British Nintendo website for all Virtual Console/Nintendo eShop releases of the series' games.

Metroid Prime: Federation Force
"Enlist with an elite arm of the Galactic Federation in Metroid Prime: Federation Force. In this first-person sci-fi shooter, team up with marines nearby or online to take on action-packed co-op missions!"
Metroid II: Return of Samus
"Guide Samus in this handheld classic as she faces tough enemies and an even tougher decision. With new weapons and engrossing gameplay that draws you deep below the surface of planet SR388, it's an unforgettable experience!"
METROID: Other M
"See bounty hunter Samus Aran in a new light in METROID: Other M. With cinematic storytelling, innovative combat and the power to swap perspectives at any point, METROID: Other M reveals Samus as you've never seen her before."
Metroid Prime Trilogy
"Three Metroid adventures come together on one disc! Metroid Prime Trilogy offers two classic Nintendo GameCube titles and one Wii epic, all presented in widescreen and featuring immersive Wii Remote and Nunchuk controls."
Metroid
"Relive the original Metroid adventure on Virtual Console as you travel to Zebes to tackle the Space Pirates. This NES classic introduced gamers to a unique mix of action and exploration, as well as a surprising new hero."
Super Metroid
"Return to planet Zebes and discover Samus's new skills in a critically acclaimed classic, now on Virtual Console. With a huge world to explore and stacks of innovations, Super Metroid truly stands the test of time."
Metroid Prime Hunters
"Join Samus as she goes up against six deadly rivals in a race to claim powerful ancient artefacts. Metroid Prime Hunters brings astonishing 3D graphics, Touch Screen control and infectious multiplayer fun to Nintendo DS."
Metroid Prime Pinball
"Control Samus in a new way as she slips into Morph Ball mode and tackles fun-filled pinball tables! Bounce from bumpers or nudge the table by tapping the Touch Screen as you go for a high score alone or against friends!"
Metroid Fusion
"Sample more classic 2D Metroid action as Samus attempts to wipe out dangerous parasites threatening the universe. In true Metroid-style, there are stacks more missiles to fire, baddies to blast and environments to explore."
Metroid Prime
"See Samus's world from a new perspective in the first game of a captivating trilogy. This huge first-person adventure takes you deep into space to unearth remnants of an ancient race and hunt down the deadly Metroid Prime."
Metroid Prime 2: Echoes
"The Metroid Prime saga continues as Samus takes on another huge challenge set amid a planet split into dark and light realms. Expect masses more exploration and face fellow bounty hunters in intense multiplayer matches."
Metroid Prime 3: Corruption
"The Metroid Prime trilogy concludes in spectacular style on Wii. With a sprawling universe to explore and immersive motion controls, Metroid Prime 3: Corruption is an epic first-person adventure that redefined the genre."
Metroid: Zero Mission
"Taking players back to the start, Metroid: Zero Mission offers a retelling of the events in the original Metroid. With updated presentation and new story insights, this is a chance to see Samus's first mission in a new light." 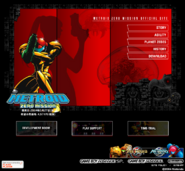