The trailer begins with an ambient theme from Area 6 playing as the Nintendo 3DS logo (which can also be seen in the background of the 3DS showing the gameplay) and a mystery figure presumably being the Queen Metroid are shown. The music then changes to Chozo Laboratory as the video cuts to a Hornoad being devoured by a Metroid larva. Samus Aran lands on SR388 and begins to explore, coming across a Chozo Statue, the Scan Pulse and the molted skin of an Alpha Metroid. She is then ambushed by a Gamma Metroid as the music changes to the Diggernaut battle theme. The trailer displays several more abilities of Samus's, including the Melee Counter, Grapple Beam, Beam Burst, Free Aim and Bomb Jump. She is also shown battling the Arachnus, as well as an Alpha, Gamma and Zeta Metroid. The trailer blacks out as Samus begins to wrestle with the aforementioned Zeta Metroid and shooting it with Missiles after parrying its bite attack with a Melee Counter. The logo flashes on-screen, along with the game's release date, September 15, 2017, with a remix of the Title theme playing during this time.

This trailer was the first that revealed the themes Area1 Add1, Chozo Laboratory, Boss Battle 6, and Title. Since this trailer confirmed that Arachnus was in the game, some fans had mistakenly assumed Boss Battle 6 to be the battle theme for Arachnus.

"#Metroid: Samus Returns brings back the feel of the classic adventures, but with improved graphics and new abilities! Coming 9/15 for #3DS!"[1] 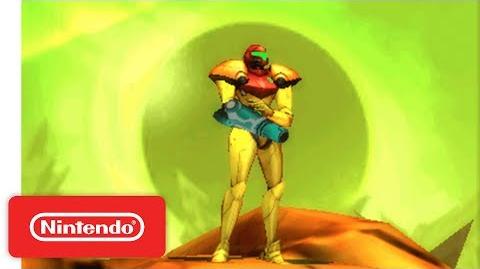 Australian thumbnail[2]
Add a photo to this gallery

Retrieved from "https://metroid.fandom.com/wiki/Metroid:_Samus_Returns_-_Official_Game_Trailer?oldid=272565"
Community content is available under CC-BY-SA unless otherwise noted.