Wikitroid
Register
Don't have an account?
Sign In
Advertisement
in: Pages in the real-life POV, Manga
English

Metroid is the name of a two part origin manga series that takes place from Samus Aran's childhood up to the story of Metroid: Zero Mission.

Written by Koji Tazawa and illustrated by Kenji Ishikawa, the series was first printed in Magazine Z and later adapted into Metroid: Volume 1 (7 chapters, published November 21, 2003), Metroid: Volume 2 (9 chapters, published May 21, 2004), and an E-Manga remake of the first two chapters with color, sound, and animation. This was hosted on the Kodansha website, with a link to it on the Metroid Official Site. While never officially released overseas, the manga has been unofficially translated by the Metroid Database.

The manga elaborates on Samus's past before she became a Bounty Hunter and describes a few events in Metroid: Zero Mission. The story re-introduces many characters from the Super Metroid comic in Nintendo Power, and expands on elements leading to the (at the time) last game in the canon, Metroid Fusion. Major plot elements from the manga would later become relevant in Metroid: Other M.

While the content of the manga would be acceptable on its own, there are a few inconsistencies between it and the main story of the Metroid games which hurts its standing as a canon source; an example is the manga portraying the Federation launching its assault on Zebes during Samus' mission, whereas the games state that the organization attacked Zebes multiple times prior to sending the lone bounty hunter. In the manga, Bombs and Missiles were uploaded to the Power Suit by Commander Adam Malkovich instead of being found on planet Zebes.

Another notable contradiction is Other M stating that Zebesian Pirates being incapable of working intelligently as a sapient species unless led by Mother Brain despite the manga featuring them actively and strategically attacking Galactic Federation-controlled planets long before they met the Chozo's central computer. However, it should be noted that this also contradicted other games that depicted the Space Pirates being quite capable of working intelligently as a sentient species even after Mother Brain and Ridley's defeat, such as the Prime games and even Zero Mission. It could be possible that there were actually a few Space Pirates that are actually smart enough to strategize on their own (such as the High Command in the Prime series) that lead the Space Pirates in the manga as well. 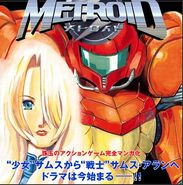