Wikitroid
Register
Don't have an account?
Sign In
Advertisement
in: Articles with non-canonical information, Bases of operations, Asteroids,
and 3 more
English

Massive Space Pirate base encases the asteroid.
Metroid is an asteroid converted into a mobile Pirate base. It has only appeared in the non-canonical Nintendo Comics System and Captain N: The Game Master television and comics series.

Metroid was first discovered by the Planeteers of Krom, a group of Intergalactic Pirates living on Zebes. They converted the asteroid into a mobile attack base, filled with powerful weapons and populated by aggressive monsters, with the goal of conquering other galactic worlds.

Throughout her mission to take over Videoland, Mother Brain commanded her forces from within her lair deep within Metroid, occasionally piloting the mobile attack base closer to the other worlds. In Kevin in Videoland, she held Princess Lana captive in a tower on Metroid, and then forced Lana, Kevin Keene, and Duke to navigate the asteroid's monster-infested corridors. In Metroid Sweet Metroid, she trapped Kevin and Duke in Metroid while she conquered Videoland, but they flew the asteroid to the Palace of Power and forced her to surrender. In Gameboy, the N Team explored Metroid as they searched for the captured Gameboy.

The surface of Metroid has been covered with a metallic exterior, shaped in a manner that causes the asteroid to resemble a giant silver brain. Metroid's interior is a maze of dark brown rocky tunnels and corridors, much like Corridor No. 5 in Brinstar. These tunnels are frequently adorned with metallic structures and lined with industrial pipes.

Metroid is fitted with Mega-Star Drive Engines allowing it to travel throughout Videoland, and it holds many concealed weapons for galactic domination. The entire asteroid is controlled by Mother Brain, due to her ability to program its electric circuits. In return, she relies on the asteroid's Zebetite to keep herself powered.

In Metroid Sweet Metroid, Mother Brain created a facade of Kevin's house and neighborhood in Metroid, tricking him into thinking that he had gone home.

Mother Brain has her own personal lair deep within Metroid, similar to the Zebesian Command Center. Fellow villains of the Forces of Chaos, such as Eggplant Wizard, King Hippo, and Dr. Wily, frequently join her in her lair as they plot to take over Videoland.

Space Pirates such as Kraid maintain Metroid's weaponry and patrol its corridors, which are infested with a wide variety of Zebesian creatures. Metroid is also home to unique creatures that have never been seen on Zebes, such as the Protoplasm.

METROID
"The asteroid known as Metroid was built by Intergalactic Pirates, known as the Planteers of Krom. They designed it as a mobile attack base to strike other worlds, far beyond their home planet, Zebes.
Metroid normally floats in space above Videoland. But, with its powerful Mega-Star Drive Engines, it can be moved anywhere in the universe.
Metroid's metallic surface conceals a huge array of deadly weapons, all maintained and controlled by monstrous creatures bent on galactic domination!
Metroid's deadliest threat, however, lies deep inside the asteroid. Here, within the endless secret corridors, dwells the smartest, most fearsome foe of all... Mother Brain!
Mother Brain completely controls Metroid by her genius ability to program every circuit to do her bidding! But, she is also dependent on Metroid; she needs the asteroid's supply of Zeebetite for power.
That's why Metroid itself is the key weapon in Mother Brain's tireless struggle to conquer Videoland!" 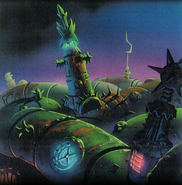 Concept art of Metroid in space 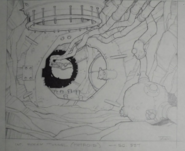 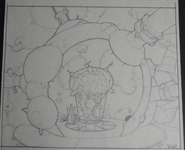 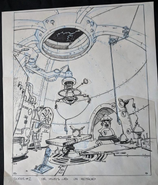 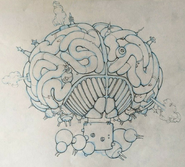