Wikitroid
Register
Don't have an account?
Sign In
Advertisement
in: Featured articles, Articles with non-canonical information, Metroids,
and 11 more
English

Stage 1: Egg
A Metroid Egg is the first stage of a natural Metroid's life cycle, laid by a Queen Metroid through her trunk-like ovipositors. Inside the egg is a developing Infant Metroid that will eventually hatch from it after an undetermined period of time.

Exposing an egg to the radioactive substance known as Phazon may cause it to change shape and size; furthermore, the creature within irrevocably becomes a mutant.

Metroid Eggs are green and oval in shape, with their bottoms covered in a tough, dry substance resembling roots which affixes the eggs to the ground in an upright position. This substance was likely to have initially been a liquid that coated the eggs as they made their way out of the Queen Metroid's body, at which point the liquid gathered to their bottoms and hardened. The roots are absent on some eggs, notably on those that are recently moved around.

An egg's color varies between appearances in games and media, along with the size but to a lesser extent. Several of these in-game differences can be attributed to the egg adapting to the environment it is located in, a trait commonly found in the Metroid species. The shell of an egg is durable enough to require the infant within to burst out from the top with force, shattering a large portion of it in the process. A blue or green fluid subsequently pours out of the hatched egg and seemingly dries up in a matter of seconds.

There are instances in the series that reveal the Egg stage of a Metroid can be skipped entirely if one wishes to artificially increase a Metroid population. Infant and Metroid larvae will split and multiply in a process similar to cells undergoing mitosis when they are exposed to Beta-Rays or Phazon. Cloning has also proved to be a reliable method to remove the need for eggs, though earlier attempts were not devoid of failures.

Samus Aran comes across several Metroid Eggs for the first time on a Pirate Homeworld, where they were kept in a research facility behind tank barriers. The Space Pirates were experimenting on the eggs by contaminating them with the radioactive properties of Phazon, mutating the unborn bioforms. Several of these eggs are already hatched by the time Samus encounters them, and although only Phazon Metroids are found nearby, it can be assumed they were born as Miniroids, their infant form. The Metroid Eggs are nearly identical to those seen in Super Metroid's introduction cutscene, and coupled with the scan data stating that the research facility once held a Metroid from SR388, it is very likely these eggs were taken from the same planet by the Space Pirates. At this point in time, the progenitor of the eggs is unknown to Samus and the Galactic Federation.

A highly mutated breed of Metroid Eggs are also seen on planet Phaaze. They are quite distinct from the natural strain, featuring a blue color, a spherical shape and irregular sizes. It is unknown what strain of mutated Metroid lays these, however the eggs' existence can be attributed to the Space Pirates and Dark Samus importing their Metroid specimens onto the planet, from which their population began to massively expand via unnatural methods developed by the ambient Phazon.

During M17: Infestation, the Federation Force came across a hidden Space Pirate facility on the planet Talvania where Metroid Eggs and larvae were kept and artificially enlarged using a device called the Amplification beam. General Alex Miles requested the team to acquire an egg for later studies. Carrying a Metroid Egg required the mech's arm cannon, preventing the use of all weapon functions. The person holding onto the egg would thus need the help of the other team members to fend off the giant Metroids and Pirates as they escaped the self-destructing facility. At the end of the mission, each egg is loaded onto the cargo ship.

The fate of this only remaining egg would be left unknown until a post-credit cutscene: a mysterious individual infiltrates a Galactic Federation room where the egg is being kept and activates a focused beam that triggers the Infant Metroid to hatch, coating the nearby surfaces in the egg's green-colored fluid. The Talvania facility also contained a log entry written by a Space Pirate describing an egg hatching during observation.

The egg is noticeably more viscous than other appearances and is covered in several green vein-like structures, greatly resembling its artwork created for Metroid II, and thus the Pirates are likely to have obtained these eggs from SR388.

While exploring the Metroid hive in Area 8, Samus rolls through a Morph Ball tunnel. A single Metroid egg can be seen in the Queen's nest above, shortly before the Metroid Detector detects several new Metroid larvae. The glimpse of the egg alongside the increase in the number of Metroids serve to indicate that a yet-to-be-seen creature is propagating the species.

After she kills the larvae and the only natural reproductive member of the species, the Queen Metroid, she enters the room the latter was guarding and finds herself in the same location where the lone egg was seen. As Samus approaches it, the egg begins to shake violently and the last living Metroid in the universe hatches and imprints onto her, believing Samus to be its mother. With the death of the Queen, no egg would ever again be produced on SR388, cutting off the Space Pirates from a natural supply of Metroids for their bioweapons research.

In the remake, Samus Returns, the egg's inner fluids are blue in color and burst upward when the last Metroid hatches. Additionally, the background of the Queen's room is filled with numerous hatched eggs partially covered in what appears to be either a mysterious green liquid or mist.

The only appearance of a Metroid Egg is during the game's introduction sequence. A flashback is shown depicting Samus' meeting with the Metroid Hatchling, the only survivor from the species' extinction by her hands on SR388. The egg and its hatching process are far more detailed than what was presented in Metroid II. The dry substance that keeps the egg upright is now present, and as the infant breaks out of it, the embryonic fluid pours and hardens from the egg's remnants. The room now features two additional, already hatched eggs, establishing the area as a nursery.

Metroid Eggs are seen twice in the game. The first instance is once more in a flashback of the Metroid Hatchling from Metroid II. Curiously, the cutscene depicts the egg as being glass-like when it cracks open, and no fluid is released during or after it hatches, unlike the flashback in Super Metroid. The hatching of the egg itself is sudden and abrupt in comparison to previous depictions. Interesting to note is the egg glowing brightly prior to the infant's birth in a similar fashion to what was seen in Metroid II. The second instance involving eggs is when Samus enters the breeding cage of the BOTTLE SHIP. Inside are numerous hatched eggs, evidence of an existing Queen Metroid aboard the ship; as Samus reaches this conclusion, she is attacked and pushed out of the room by the very Queen who laid them, a clone of the now-deceased Metroid that was spared by Samus back on SR388. After Samus kills her, the BOTTLE SHIP's production of eggs is halted, effectively terminating Project Metroid Warriors. From this point on, no Metroid Eggs are seen again for the remainder of the series.

The baby's egg also appears in Past is Prologue, the commercial for Other M.

"EGGS CHAMBER"
Exposure of unhatched metroids to alien sustentative chemicals and levels of radiation has been insightful as to the adaptability and survivability of the organism, even at this early latent state.
Specimens that survive have been observed with greater scrutiny as to their cumulative behavioral augmentations, as well as any affect exposure has to their ability to drain life energy.

"I made the metroid [sic] eggs specific for this room. I watched the intro to Super Metroid again, and noticed that the fluid inside the egg dries almost instantly when exposed to the air. I created some "hatched" eggs similar to this, with the embryonic fluids hardened immediately in their dripping state."[1] 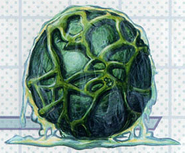 Metroid Eggs exist on Phaaze, albeit highly mutated (as they are inconsistent in size).

The egg in Samus Returns.

The egg begins to hatch.

The baby is born.

Samus is surprised to find hatched eggs in Room MW.