Wikitroid
Register
Don't have an account?
Sign In
Advertisement
in: Pages in the real-life POV, Games, Nintendo 3DS
English

Upon starting the demo, General Miles will ask if the player wishes to practice or begin a match. If the player has done well enough, they will unlock the Shooting Range and Combat Sim tutorial for the Campaign. While the demo was said to lose online support in September, by which point the full game would have been released, online play support lasted until December 31st at 23:59 PM. Blast Ball in the full game would still be supported.

"Six mechs. Two teams. One free pass to play the most intense 3-on-3 sci-fi sport in the Metroid universe. Literally shoot the ball into the goal and grab power-ups as you fight. Increase your firing rate or even eject opponents from their mechs! Score victory locally or online* as you prepare for the full game Metroid Prime: Federation Force.

*This demo will be supported by online servers for a limited time beginning 7/21/2016.
Once the online servers for the special demo are discontinued, online functions will still be available for this mode in the full Metroid Prime: Federation Force game. Wireless Internet access required for online play. For more info, go to support.nintendo.com." 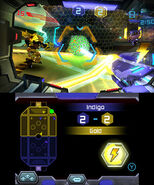 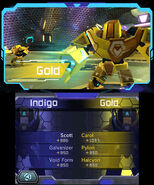 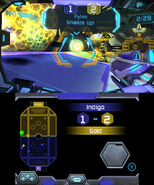