Metroid Prime was the live-action commercial for the game of the same name. Directed by Alex Proyas, the 60-second version of the commercial enjoyed a brief time in cinemas. Digital effects for the commercial were done by Animal Logic.

The commercial is a mixture of live-action footage and actual gameplay clips in the game. Samus Aran's Gunship flies to the Frigate Orpheon; Tallon IV is seen in the background. Samus Aran exits and begins exploring the ship. During the trailer, a man speaks the following dialogue: "The cold silence of space only punctuates the feeling of death that emanates from this virtually lifeless planet. Only one thing is alive and well here: evil. It must be destroyed, decimated, exterminated. But first, it must be found." Samus can be seen shooting Parasites with the Wave Beam (even though she does not have it at the start of the game) and grappling across a gap. Throughout the commercial, Samus is also seen using the Ice Beam, Scan Visor, and X-Ray Visor. The final scene shows Samus confronting the game's first boss, the Parasite Queen. 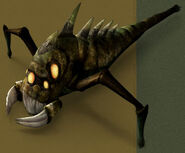 Retrieved from "https://metroid.fandom.com/wiki/Metroid_Prime_(commercial)?oldid=261040"
Community content is available under CC-BY-SA unless otherwise noted.