Wikitroid
Register
Don't have an account?
Sign In
Advertisement
in: Pages in the real-life POV, Wii, Unreleased Games, Games
English

In January 2012, a prototype of Metroid Prime 3: Corruption dating from March 2nd, 2006 was leaked onto the internet. This prototype of the game, which was released August 27th the following year, was built on development hardware for the Nintendo GameCube, outfitted with additional RAM. The prototype can only run on this hardware or a Dolphin emulator modified to allow additional RAM; as the prototype game requires at least 48MB of GameCube memory, just over the actual console's capacity (of 43MB).[1]

The prototype is entirely playable with a GameCube controller, for unknown reasons, and features an array of debug options. The prototype places Samus on Norion. She cannot enter her Gunship to save or leave Norion.

The main menu features a number of options, as follows:

Because the D-Pad controls have not been implemented, they cannot be used to activate weapons.

Attempting to use the Fire and Ice Balls (possibly scrapped items) makes the game crash. 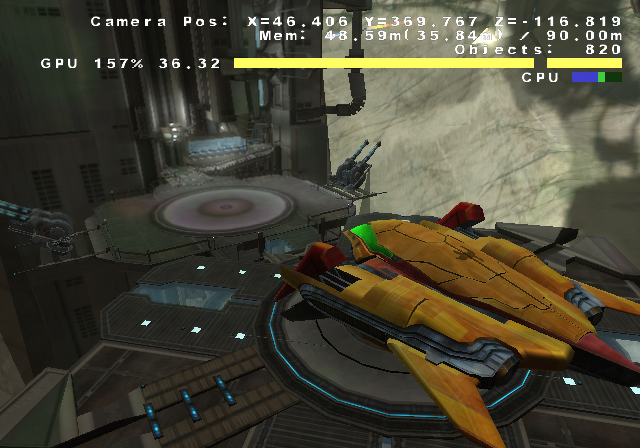 Revolution was the original codename of the Wii. None of these options are functional, the only way to make it funtional are with the prototype controls and using a GameCube Dev Hardware.

The same options are then repeated, in yellow-colored text.

An early version of the Bonus Credit system.

By pressing up on the D-Pad, a third-person debug camera is enabled. The camera switches to a fixed third-person perspective similar to Super Mario 64. The position of this camera depends on where the player activates it.

The Samus model has no animation except for the Arm Cannon tilting when the player has aimed up or down. Samus appears to float above the surface of the area. Samus is completely controllable in the same manner as if she were being controlled as normal.

The initial demo begins as Samus has landed on Norion. The 3-D map for Docking Hub Alpha is incomplete.

There are sub-menus that show and toggle certain events that happen during the Norion sequence in the final game.

All items can be activated in the debug menu, but may have not been implemented and so are non-functional. The Scan Visor is useless as there are no scannable objects. The Command Visor HUD works, but Samus' Arm Cannon clips through her left hand, and there are no Command Icons for Samus to scan. The X-Ray Visor is completely non-functional and only turns the Combat Visor HUD red.

The Plasma Beam and Nova Beam are non-functional; they do nothing except change the color of the Power Beam. Effects for the beam hitting a wall have not been programmed. Hypermode can be enabled along with all of its upgrades with the "give all powerups" cheat, and is activated by pressing Y and A. The Grapple Beam can be used anywhere by pressing Y (Missiles are moved to Z) instead of being restricted to grappling Grapple Points.

There are three different settings for Hypermode type:

All Hypermode power-ups are present, with the possible exception of the Hyper Grapple. The normal shot has no charge function, though it is affected by the "HyperShot" rapid-fire item.

The opening sequence of the final game is absent when the demo loads into gameplay. The prototype begins on Norion, when Samus exits her Gunship and must approach a Federation Marine that debriefs her on the situation, that triggers a cutscene. The voice work for this sequence was recorded (the dialogue is different, but abdridged, although the message is the same). The cutscene is unavoidable; attempting to run past the soldier will still trigger the cutscene. In the final game, the entire landing sequence of Samus's ship, exit from the ship, and dialogue with the soldier happens in one continuous cutscene.

The details of the mission objectives are highlighted with greater detail in the final.

As stated, Samus cannot reenter her Gunship, so saving and loading are done from the debug menu.

Missile Expansions use the Varia Suit pickup (of a floating, spinning Screw Attack icon) from Metroid Prime as a placeholder. Energy Tanks appear yellow in color.

Docking Hub Alpha has a different layout. The area where the Grapple Lasso would be obtained the final game is non-existent, and the Missile Expansion in the Landing Site can be obtained by jumping to it and blasting open a grate with a Missile, instead of by grappling to the Expansion as in the final.

The Cargo Hub has an upper balcony and a different enemy layout; the Aeromines may not have been programmed at that point. Another Missile Expansion, again behind a grate can be found on the upper floor. The door leading to Generator B is behind a solid wall and covered in a Red Blast Shield; Samus can destroy the Shield but she still will not be able to open the door.

Cargo Dock A is different in layout; as Samus enters the room ramps off into upper and lower floors. The upper floor contains a Ball tunnel that can be unblocked with Grapple Lasso and then entered for another Missile Expansion. There is no cutscene, but the door locks until all Space Pirates are killed. Rundas' appearance in Cargo Dock A is partially implemented; he kills the pirates in the cutscene, but afterward he stands in place while the door unlocks.

The pull-twist-push switches were not yet implemented, meaning they must be activated by standing in front of them and pressing A, like a Hand Scanner.

Maintenance Station does not exist. An Expansion does exist in Conduit C, in a side alcove right before the Morph Ball tunnel. In the final, it was removed.

Meta Ridley's attack in Cargo Dock C was also partially implemented, but he cannot bite or be defeated. The Generator Shaft has not been programmed either: the cutscene plays and ends with Samus falling to her death.

The Leviathan does not appear. The doors leading to the Control Tower that correspond to Generators A and C are open, but the door to Generator B is closed, as Rundas has apparently not yet been programmed to activate it. Samus can get through using the debug camera, but the door on the other side will not open, so Samus cannot enter the Tower.

As stated, many of the debug features mentioned above, such as the multiplayer mentions, may have been leftovers from the Echoes engine. The non-functional Dark Visor can be selected, and the Game Over screen from Echoes is used when Samus dies. The Hyper Missile fires a Super Missile, and the Hyper Ball uses the sound effect for the Spider Ball.

Names of Echoes bosses, the Rezbit Virus Power Suit reboot text and the "All [area name] Dark Temple Keys acquired!" messages are also leftover. Rundas and Ridley, neither of whom are present in Echoes, are referenced by name just before Amorbis, the first major boss of Echoes.