Beyond the bounds of the Galactic Federation's controlled universe lies the Tetra Galaxy, where the now-extinct Alimbics once ruled. The region under the Alimbics' reign was and is still known as the Alimbic Cluster. The Alimbics ruled with much force, but were also efficacious in their decisions. One day, however, all of the Alimbics suddenly disappeared without any warning or explanation, leaving behind many relics and ancient, valuable objects, some of which are quite powerful.

Now something in the Alimbic Cluster is eerily communicating with powerful bounty hunters and other intelligent animals, telepathically uploading a message. "The secret to ultimate power resides in the Alimbic Cluster" is the sentence that played back mysteriously in the minds of hunters Sylux, Spire, Noxus, Kanden, Weavel, and the feared Trace. The message is in various dialects, languages, and even slangs, but it always boils down to the above sentence. This simple message tempted many to make their way to the Alimbic Cluster, frantically and violently, to reach their own goal of obtaining an unknown source of ultimate power. Some want power for their own doings, others seek it for a more noble cause like saving their people. But it seems that all of them are willing to take each other out to gain this mysterious power. The Galactic Federation sends Samus Aran a Mission File, asking her to discover more about this mysterious message. Her mission: "Discover the truth about this mysterious message, to protect against a potential threat, and to keep the Alimbics' ultimate power from falling into the wrong hands."

Samus arrives at the Celestial Archives, a space station that holds a wealth of information regarding the Alimbics, most of it lost due to age and lack of upkeep. Samus first encounters Kanden here and fights him for one of the artifacts that will allow her to reach one of the guardian chambers.

After collecting the first three artifacts, she encounters her first Boss in the game, a bio-weapon named Cretaphid which resembles a totem pole with multiple cannons running down the shaft. After defeating it, she receives her first Octolith, a key to the "Ultimate Power." A timer kicks on and Samus is forced to backtrack through the entire station to her ship.

After escaping, her ship scans the Alimbic Cluster and allows her to explore three more worlds: Alinos, the homeworld of the Alimbics, Vesper Defense Outpost, a remote defense and weaponry station, and Arcterra, a frozen world. On each world there are two Octoliths and at least one "Affinity Weapon." Samus must find these weapons in order to open some special doors, which will allow her to find more Artifacts. For every Octolith, there are three keys to be found.

During her journey, she finds more information regarding the long lost Alimbics and their history, recorded mostly through things called Datashades, which are visible only through the Scan Visor.

Once she has collected all of the Octoliths, she must return to Alinos to activate the Alimbic Cannon, which allows access to the Oubliette. This structure holds the long-dormant and extremely dangerous Gorea hinted at throughout past logbook entries. When she gets to the Oubliette, she sees all of the Hunters firing their signature weapon at Gorea, only to be defeated and have their special abilities absorbed by the creature. Gorea then attacks Samus. Once defeated, it will enter a second form if Samus has shot the Colored Panels on the walls in the proper order with the correct weapons. If not, the station blows up before any of the Hunters, Samus included, have a chance to escape.

If she does activate the nodes, then a second battle with Gorea takes place in the Oubliette's main room, where Samus finds the only weapon capable of harming Gorea, the Omega Cannon. Upon defeating Gorea, the Oubliette begins to fall apart in a series of explosions. Samus and the other hunters are believed to have escaped the destruction of the Oubliette. After the final explosion, Samus, in her Zero Suit, is seen floating in a vision, encountering 3 Alimbic beings that present her with a wave of gratitude. When this vision is over, Samus is returned to her Gunship in her Varia Suit. The game concludes with Samus's Gunship flying off into space.

Metroid Prime Hunters was developed by Nintendo's Redmond-based subsidiary Nintendo Software Technology (NST). It was led by the game's director, Masamichi Abe and the lead technical engineer, Colin Reed. The team for Hunters was composed of thirty people, which Abe noted was larger than the development team of most other games for the Nintendo DS.[5] Metroid Prime series producer Kensuke Tanabe came up with the original idea for the game. Retro Studios, which developed the mainline Prime games, was unable to develop Metroid Prime Hunters because it was already working on Metroid Prime 3: Corruption. Therefore, Tanabe contacted NST with the idea, and let them develop it instead. NST developed the game instead of Nintendo themselves because they wanted the division to influence Hunters with Western ideals, styles, and presentation.[6]

While developing the game, most of NST's efforts were focused on its multiplayer aspect because of its first-person shooter gameplay, and to take advantage of the Wi-Fi and voice chat capabilities of the Nintendo DS. One of the game's designers, Richard Vorodi, noted that "the hardware kinda dictated [their focus onto the game's multiplayer mode]."[7] Wanting to introduce a new element to the Metroid series, Abe created several new Bounty Hunters after he realized that the game's multiplayer mode and the new bounty hunters could both be implemented seamlessly into the game: "We had this idea early on and thought that would be a good way to introduce [Hunters] and [the new bounty hunters] to the gameplay and take advantage of that in the multiplayer."[5] Metroid Prime Hunters includes several references to previous games in the Metroid Prime series: Samus' Gunship is from Metroid Prime, while her Varia Suit is from Metroid Prime 2: Echoes. The developers decided to add them because they wanted to show that the technology has evolved, and they also wanted to include something that was instantly recognizable to those who had played previous games in the series.[6]

The game was first revealed at the Electronic Entertainment Expo (E3) convention in 2004.[8] An early demo, titled Metroid Prime Hunters: First Hunt, was included as a pack-in game with the Nintendo DS when it launched in 2004.[9] After the demo was released, the game's controls shifted from a control stick method to stylus aiming.[5] When Nintendo received negative feedback at E3 2005 about the game's lack of an online feature,[5] the company announced in August 2005 that the game's release would be delayed to give the developers time to implement Nintendo Wi-Fi Connection support.[10] After the game's release was delayed to give NST time to implement the multiplayer feature, the developers took the time to make more changes. The game's framerate was reduced to make the graphics move more smoothly. The game's visuals were improved; a developer added reflections to the Morph Ball — other developers admired the effect, and added it to other parts of the game. NST collaborated with Retro Studios to design the game's art and characters to make sure that they fit into the overall Metroid series. When asked why Metroid Prime Hunters was placed between Prime and Echoes chronologically, Reed noted that the game was not influenced by the story of either game, so there were no continuity issues. He described Hunters as a side story to the Metroid Prime series.[5]

Through a partnership between Nintendo and HMV, British players could partake in a Hunt Is On Tournament on Saturday, May 20, 2006 in Birmingham, London, Edinburgh and Manchester in the United Kingdom. The prize was an all expenses paid trip to Seattle to meet the developers of Hunters at Nintendo Software Technology.[11]

Metroid Prime Hunters plays similarly to the past Metroid Prime games in that it also focuses on exploration and upgrading abilities, but also has a stronger focus on shooting. The major upgrades Samus can get in single player are all weaponry, most already wielded by the other Hunters. In multiplayer, these weapons serve some traditional purposes similar to the weapon selections of other FPS titles; in single player, they are more often used to solve puzzles as find the weakness of various beasts that the player has to eliminate.

Metroid Prime Hunters is the first game in the Metroid series to feature in-game uses of Samus's gunship besides saving and restoration purposes, which is later expanded on in Metroid Prime 3: Corruption. The game was also the first to have Samus explore multiple territories across the reaches of space, and it introduced sub-weapons to the Metroid series.

Metroid Prime Hunters is also somewhat more simplistic and linear than the main Prime games. Samus only has two visors, the Scan Visor and the Combat Visor, and there are no suit upgrades other than Energy Tanks, Missile Expansions, Universal Ammunition Expansions, and the weapons of the other Hunters. As the gameplay requires using the touchscreen to aim and the L or R-trigger to shoot, the controls are more akin to a PC FPS rather than the old Metroid Prime control scheme.

In a multiplayer game, there are twenty-six maps that can be played, most of them based on areas of the single player game. There are several game types, including the typical death-match mode, dubbed "Battle", a Capture the Flag style game aptly named "Capture", two King of the Hill type modes called "Nodes" and "Defender", and a mode with limited lives available called "Survival". There is also "Bounty", where all the players are hunting after a single Octolith, and "Prime Hunter", a Juggernaut-styled game mode. Multiplayer is limited to two to four players. Two teams of two can fight each other in most game types, or there can be a two on one handicap game. Not all maps are available for every game type and some become slightly altered depending on which mode is played. Multiplayer mode can also be played single-player by adding bots (AI-controlled opponents). Multiplayer is only possible locally since the shutdown of the Nintendo Wi-Fi Connection service. The multiplayer mode is absent in the Wii U Virtual Console version of the game.

All of the Hunters seen in single player are playable in multiplayer, and each gains special attributes for their Affinity Weapon -- for example: Samus's Missiles have a homing ability while the other Hunters' do not; Sylux's Shock Coil restores the user's health, etc.

The creatures in Metroid Prime Hunters are a mix of traditional Metroid and Metroid Prime enemies, like the Zoomers and a more challenging variety of new enemies like the Guardians. Strangely, there are no Metroids in the game; instead, there are creatures known as Quadtroids, which, while similar in appearance and attack, are not genetically related. On closer inspection, one will notice that there are only a select few types of creatures, and most of the creatures that appear in different environments are variants of others. There is an obvious recurring theme of interstellar creatures such as Blastcaps and Ithraks who are able to migrate from planet to planet and even inhabit artificial space stations. Most creatures in the Alimbic Cluster, both biological and artificial, are not native to their current environments; they are mainly migratory entities who stowed away on space vessels which later visited these places. 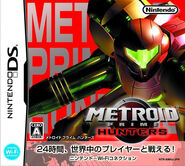 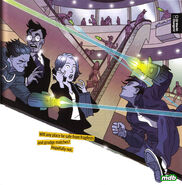 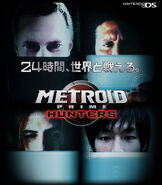 Nintendo Official Guidebook for Metroid Other M, page 172
Add a photo to this gallery

Retrieved from "https://metroid.fandom.com/wiki/Metroid_Prime_Hunters?oldid=273930"
Community content is available under CC-BY-SA unless otherwise noted.