This article is about the Wii compilation of the first three main Metroid Prime games. For the original trilogy, see Metroid Prime (series)#Prime trilogy.

Metroid Prime Trilogy (sometimes spelled as Metroid Prime: Trilogy) is an enhanced compilation of Metroid Prime, Metroid Prime 2: Echoes, and Metroid Prime 3: Corruption released on August 24, 2009 for the Wii in North America. It was released in America, Europe and Australia in lieu of the New Play Control! versions of the former two released in Japan. The product is now out of print. In 2013, American retailer GameStop obtained additional, unshrinkwrapped copies of the game for release as one of its vintage titles selections.[1]

According to Mike Wikan, "probably 50-60%" of the changes to the Trilogy version were adjustments to scan files. Nintendo had requested "hundreds" of changes to scans and lore across the three games to establish consistency.[6]

The packaging of the Trilogy varies between the regions it was released in. In North America, the product came with a metal SteelBook packaging and transparent sleeve. However, in Europe and Australia, the Trilogy instead was packaged in a normal Wii case, but with no text, inside a cardboard sleeve which reproduced the effect of the transparent sleeve and the SteelBook cover and back.

Trilogy also came with a 5 double-sided panel art booklet, featuring concept art from the Prime series, some of which was previously unreleased, along with a history of Samus' adventures through the games. Unfolded, the booklet was just under 36 inches in length.

Metroid Prime Trilogy uses a single dual-layered disc to contain the three games of the series. Dual-layering was also used on the discs for Super Smash Bros. Brawl and Metroid: Other M. It allows discs to contain much more content than would be normally available on a standard Wii disc.

The three games are accessed from a special menu that is unique to Metroid Prime Trilogy. The menu has a rotating, mechanical-tunnel background, showing what appears to be the interior of Samus' Arm Cannon. As the player selects the various options and so on, the camera pulls out to various parts of the tunnel. Upon selecting a game file to play, the view pulls back quickly to reveal the outside of Samus' Arm Cannon. A similar tunnel effect can be seen in the intro cutscene in Metroid: Other M. The menu music for Trilogy also combines sounds and tunes from the title themes of all three games.

Metroid Prime Trilogy has been mostly well received. However, the aforementioned removal of graphical effects in the original Prime, as well as Admiral Dane's profanity in Corruption, has received minor fan criticism.[8] Voice actor Timothy Patrick Miller recalled on a minor dialogue alteration for his voice work:

Since it was announced that Metroid Prime 4 was in development, there have been persistent rumors of a port of Trilogy to Nintendo Switch. Industry insider Imran Khan indicated on January 25, 2019 (the day Nintendo announced that development of Prime 4 would restart) that the Trilogy port had been done for a long time, and was meant to be announced in December 2018.[10]

In comments on the Shinesparkers Facebook page, former developer Mike Wikan expressed skepticism that this would be realized. He explained that while converting Prime and Echoes to using Wii controls was straightforward, it would be difficult - but not impossible - to adapt Corruption to use non-motion controls due to the way it was engineered.[11] Because Retro no longer has the editor tools to work with the code base of the Prime series, Corruption would have to be entirely rebuilt from scratch, and would likely require a year of development time and a four or five person team working full time to achieve it.[12] After Wikan's comments went viral, he received harassing messages from some members of the Metroid fan community.

Jennifer Hale has expressed interest in returning for a potential Switch port of Trilogy.[13]

Front of boxart and SteelBook.

Back of boxart and SteelBook. 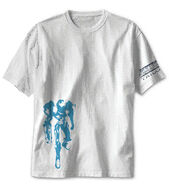 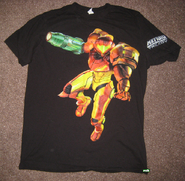 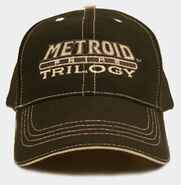 Promotional email banner for the European offer of a free download of Metroid.