The Metroid Theft Incident (メトロイド強奪事件?)[1] was a Space Pirate massacre on the Ceres Space Colony. Carried out by Ridley, the intent of his mission was to recover the the last surviving Metroid at all costs, and to bring it to the rebuilt Pirate base on Zebes. The incident occurs at the beginning of Super Metroid and sets the stage for the rest of the game.

The cause of the incident lay in previous incidents involving Space Pirate efforts to exploit the Metroid species as biological weapons. After repeatedly foiling the Space Pirates' plans to use the Metroids to conquer the cosmos, Samus Aran was dispatched by the Galactic Federation to their homeworld of SR388, to eradicate the Metroids once and for all. The Space Pirates somehow learned of Samus's mission and dispatched Proteus Ridley, who was in the process of discarding most of his Meta cybernetics following his defeats during the Phazon crisis.

By the time Proteus Ridley arrived to SR388, Samus had killed all Metroids on the planet save for a single hatchling, which she spared as it hatched in front of her and imprinted her as its mother. Unwilling to lose the Metroid, Proteus Ridley grabbed the hatchling and attempted to kill Samus. However, he was unable to defeat her, and attempted to leave with the baby only for Samus to give chase. He rose again and continued to battle her, eventually overpowering her. Before he could kill Samus, the baby intervened and latched onto Ridley, draining some of his energy and returning it to Samus. It continued to assist Samus in this manner until Proteus Ridley collapsed, exhausted. Samus and the baby then left SR388 in her Gunship.

However, while defeated, Ridley was not dead. Sometime after the battle, he rose from the ground, discarded the rest of his cybernetics and pursued Samus.

Having seen how the baby saved her life in the battle against Proteus Ridley, Samus felt it had enormous scientific potential and took it to the Space Science Academy on the Ceres Space Colony for study. After assisting with their experiments, the scientists concluded that the Metroids not only had the ability to drain energy from organisms, but to channel it into them as well. They felt that this could benefit civilization greatly. Satisfied that all was well, yet pained to leave her new "child" behind, Samus left the station in search of a new bounty.

Before she reached the asteroid belt, Samus received a distress signal from Ceres alerting her to an attack. She immediately turned her Gunship around and flew back to the station to investigate.

Arriving on the station, Samus found it eerily silent, and empty. Reaching the inner Lab, she found the scientists had all been murdered, and the baby's central capsule broken with the infant missing. Exploring the station further, Samus eventually came across the baby, seemingly alone in a storage capsule in a small room.

As she approached it, Ridley suddenly appeared and roared at her. Grasping the baby in its talons, it engaged Samus for a short while. In the ensuing battle, Samus was able to make Ridley drop the baby's capsule, but he quickly re-collected it and flew out of the station, but not before setting off the station's Self-Destruct System. Samus raced back to her Gunship and escaped the base shortly before its explosion.

Ridley took the baby to the rebuilt Tourian on Zebes, where the Space Pirates resumed their cloning efforts by exposing the baby to Beta-Rays. However, an unexpected side effect occurred: rather than growing into the Alpha stage, the baby remained in its Larva form and grew massively in size. The attack on Ceres began Samus's second mission to the planet Zebes, to recover the baby and eliminate the Space Pirates once and for all.

In the Super Metroid comics in Nintendo Power, Armstrong Houston encounters Samus on Ceres as she is escaping. The comic explains that Ridley destroys the station by setting the station's Main Computer to self-destruct. After escaping, Samus and Houston are ambushed by Space Pirate ships, but fend them off, and Samus reports to Chairman Keaton at Federation Bureau Headquarters. Keaton severely reprimands Hardy, chief of the Galactic Federation Police for neglecting to monitor Zebes following Samus's Zero Mission, which allowed the Metroid Theft Incident to happen. After this, Samus returns to Zebes with Houston in tow.

A 3D re-enactment of the battle with Ridley on Ceres is depicted in the introduction of Super Smash Bros. Melee.

The History of Metroid in 2D - Metroid Dread Primer shows an abridged version of the theft as part of the transition between Metroid II: Return of Samus and Super Metroid. A notable difference is that Samus directly witnesses Ridley's theft of the baby in the Lab and never gets a chance to fight him before being forced to evacuate from the doomed colony. There is also a Chozo Statue present in Ceres Station, carried over from the SR388 environment in the trailer's previous segment. 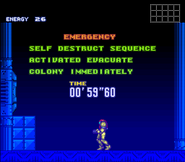 Storyboard for the battle.