This article, image or section covers non-localized media that has not yet been fully translated into English.

Metroid Zero Mission Official Site is the official Japanese website for Metroid: Zero Mission. The front site features the game logo with release and price information below it, Samus Aran in her Power Suit (with a silhouette of Zero Suit Samus behind her) next to three Metroid larvae and in-game spritework of Chozo architecture. From here, several pages can be accessed with information about the story, abilities, Zebes and previous Metroid games. There are also pages with downloads, a Development Room, a technical and play support forum and a sweepstakes. Below all of this are links to the Nintendo site, as well as the Metroid Prime and Metroid Fusion sites (which now redirect to the Metroid: Samus Returns site).

For a time, the Japanese commercial for the very first Metroid game was hosted on this website. However, it has since been removed.

Clicking this brings up a flash scene with a short summary of the game's story, including artwork of a young Samus, Kraid, Ridley and the Metroids. Samus's emergency order to eradicate the Metroids and Mother Brain is highlighted. During the scene, the music switches from the Wrecked Ship and Brinstar themes to the theme that plays as the Space Pirate Mother Ship is landing on Zebes. After the scene is over, there is an option to replay the scene or read a text version. While watching the scene, there are buttons to skip it, and disable the sound. 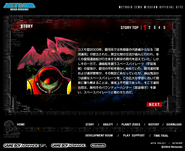 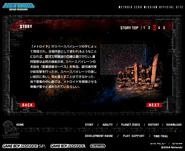 QUESTION: I don't quite understand the Metroid story. How can I learn more about it from the beginning?

ANSWER: You can learn about Metroid's history from this link, starting with Metroid: Zero Mission: http://metroid.jp/metroid_version2/history/index.html

The Ability page functions and looks similarly to the in-game Samus Screen. Item names can be clicked on to produce a short description of the item with a video to the right demonstrating the item's use in-game. The three Unknown Items are blocked by Chozo text, and when clicked, the video will become static. The selected item connects to the corresponding feature of the Power Suit on this screen; i.e. Beams and Missiles point to the Arm Cannon, while the Hi-Jump and Speed Booster point to the left arm. The background behind the image of Samus constantly flashes red, blue and green colors. Notably, the Power Bomb is shown off here despite not being obtainable (barring Sequence Breaking) until after the point where the Unknown Items are revealed. The video does not work.

This page features artwork of Samus and an image of each area of Zebes, formatted like floors. Clicking on each area produces a small description, a short clip of the area and images/names of any bosses there. Chozodia and the Space Pirate Mother Ship, being later game areas, are not listed here. An image of Samus Aran's Gunship, while not a boss, is included with the Crateria page since it is located in that area. The movie clips can be fast forwarded or rewound by a few seconds with buttons underneath the player.

Tourian
Add a photo to this gallery

This section features a timeline of all six Metroid games released to that point, with their Japanese box art: Metroid, Zero Mission, Metroid Prime, Metroid II: Return of Samus, Super Metroid and Metroid Fusion. The games are connected by a horizontal line with circular radars or eyes resembling that of the Ridley Robot; one for Zero Mission is split off from the one for Metroid a second or two after the page is loaded. Clicking each box art brings up a small description of the game with a screenshot from it and either another screenshot of the Title Screen (Metroid, Return of Samus and Super Metroid) or a link to the respective site (Fusion and Prime). Clicking the Zero Mission link brings up the Story page (see above).

Metroid Fusion
Add a photo to this gallery

The Development Room is a subsection of the site. The background includes artwork of Samus Aran, Ridley, a Larva Metroid and a Zoomer. The Development Room includes a gallery of exclusive artwork, an FAQ with Yoshio Sakamoto, and a Super Technique page that demystifies elaborate Special Actions in Zero Mission. The header that leads to the Development Room includes photograph of what appears to be a development cubicle with the game's artwork clipped to the side of it. Among the artwork is a Gravity Suit render that appears as a sticker in Super Smash Bros. Brawl, but is otherwise not known to be publicly available.

The gallery is separated into three tabs: Chozo relics, the Zero Suit, and Kraid and Ridley. The artwork is accompanied by notes, which have been unofficially translated into English by the Metroid Database.

Description of the Chozo's abilities.

Ridley. Depicts the Charge Beam Beast and also a "Ridley-2" form.
Add a photo to this gallery

An FAQ by Yoshio Sakamoto answering fan questions about the Metroid universe mythology, including story elements such as how Samus activates her Power Suit. This was also translated by the Metroid Database in December 2009.


This article or section is missing an existing Scan or Logbook entry from one of the games.
You can discuss this issue on the talk page or edit this page to add the data.

Information on the Kick Climb, Shinespark, Bomb Jump and Ballspark is provided here in videos.

The Play Support page on the website is split into four volumes and appears to provide gameplay advice to players in places where they may get stuck.

Vol. 4
Add a photo to this gallery

At one point, a sweepstakes was held on the Zero Mission site, where players were challenged to submit their best completion times and item collection percentages to win prizes. The grand prize was a special Game Boy Advance SP with the Varia Suit colors and Samus's childhood drawing of herself with Old Bird and another Chozo, possibly Gray Voice. This drawing can be seen in-game in the cutscene after the credits. Runner-up prizes won a T-shirt, an autographed poster for the game featuring Chisato Morishita as Samus, and a standee of Morishita as Samus. The winner beat Zero Mission in 28:09. The shirt was also available through Nintendo Power. After the conclusion of the contest, all participants were ranked in a leaderboard.

Add a photo to this gallery
Retrieved from "https://metroid.fandom.com/wiki/Metroid_Zero_Mission_Official_Site?oldid=251282"
Community content is available under CC-BY-SA unless otherwise noted.