Wikitroid
Register
Don't have an account?
Sign In
Advertisement
in: Pages with sourced titles, SR388, Area 3,
and 2 more

Metroid webs[1] are a substance found in the Metroid-infested caverns of SR388.

Metroid webs are found in the Metroid hives deep in the subterranean tunnels of Phase 4. Unlike bushes, Samus Aran can walk through these webs without being harmed, since it deals no damage to her. However, its thick nature means that it will block her missiles, acting as a barrier that hinders her combat abilities. Because Samus must fight an Alpha Metroid and a Gamma Metroid in caves encrusted with Metroid webs, she must first clear out the webbing by shooting it with her beam weaponry.

In the remake, the webs are no longer an interactive obstacle, but are immensely expanded upon in their association with Metroids.

The webs are secreted, via unverified means, by Metroids and are initially in the form of a green or green-yellow gelatinous fluid that seemingly hardens with time, shaping into webs before finally becoming durable, non-uniform, bio-organic structures that serve as homes for the species. The resin-like material begins to form near Metroid larvae and on the corpses of several prey, where it expands in both volume and complexity as the Metroids age until the webs overtake entire cave systems. The viscous substance produced by the Queen Metroid, who is likely the oldest member of her species on the planet, has developed to the point of altering the surrounding ecosystem; unnatural, pulsating fungi-like vegetation and organic structures resembling maws are found throughout her hive and nowhere else on the planet.

Within the same area, the green resin can be seen flowing freely from odd, sometimes throbbing formations on the ceilings of the Queen's home, which implies that a sufficiently developed nest will itself begin producing the organic compound and add to the webs' expansion. Interestingly, her hive, along with an earlier Omega Metroid's home, also produce copious amounts of clear yellow fluid that flows out from similar openings in their habitats. This production of both green and yellow fluids is a process that seemingly does not occur in rooms with extreme heat.

Gamma Metroids are unique in the way they utilize their webs, as they are known to form large masses of entangled webbing on the walls of their caves, which they use to hide secret passageways that they crawl through after receiving sufficient damage from Samus. These web-doorways will only open and fold when they are in physical contact with a Metroid, forcing Samus to give chase through a different path.

"Not only will you meet up with more Metroids than ever before, but you'll also experience long, vertical tunnels with poisonous plants, restraining Metroid webs, and very few platforms." 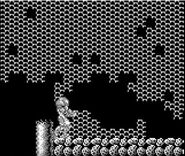 The first Alpha Metroid in its web-covered cave

Thick webbing in a Metroid-occupied room in Area 1

The webs in the first Omega Metroid's room are at an advanced state. Yellow liquid is pouring from an opening above

Metroid webs covering the floor, ceiling, and walls of Area 8