Samus Aran's Military Dress[1] was an outfit that appeared in the Metroid: Other M flashback cutscenes depicting her service in the Galactic Federation Army. She wore these clothes as a young woman with her hair being shorter than it was in the present day (of the timeline). It was not playable in-game.

Her Military Dress consisted of a long green army shirt that was partly unbuttoned, showing a red shirt underneath. Samus wore grey fatigues and kneeguards with what appeared to be a holster similar to that of her Paralyzer and brown knee-high combat boots. She also wore fingerless gloves and an earpiece over her left ear.

Young Samus in Military Dress
"I always had something to prove while enlisted in the Galactic Federation Army - at the time, I felt surrounded by people who treated me like a child, or used kid gloves because I was a woman. In the face of the well-meaning behavior of the other soldiers, my response was to become increasingly bitter."

In Super Smash Bros. Ultimate, one of the Primary Spirits is Young Samus, who is depicted wearing the Military Dress. This Spirit is also seen (alongside the Guardian and Rathalos Spirits) on the Tips menu.

Young Samus is Advanced class and Neutral type, with two available support slots. While equipped by a fighter, she grants the Shooting Items Power ↑ ability.

In her Spirit Battle, Young Samus uses Zero Suit Samus (in her Metroid: Zero Mission Casual Outfit) as a Puppet Fighter. She is fought on the Frigate Orpheon stage, and she falls slowly while in midair. She is also accompanied by Snake (in his white alternate costume), presumably as a stand-in for Commander Adam Malkovich, and both fighters must be defeated in order to unlock the Spirit. 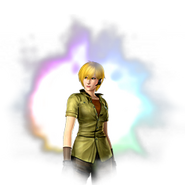 Retrieved from "https://metroid.fandom.com/wiki/Military_Dress?oldid=275210"
Community content is available under CC-BY-SA unless otherwise noted.