Missile Stations (also referred to as Missile Terminals or Missile Recharge Stations) restore all of Samus Aran's Missiles. They are found in Super Metroid and Metroid Prime, and are replaced by Recharge Stations and Ammo Stations in other games. When it starts to replenish Samus' missiles the central wheel will begin to turn and a gold light will shine out of the slots in the wheel. Missile Stations are very rare in both games. However, in Super Metroid, these will not restore Super Missiles; only regular ones.

In Other M, Navigation Booths can be used as Missile Stations and restore all of Samus's Missiles.

Terminals (page 8)
"These top up all your missiles to as much as you can currently carry. Location: Crateria, Brinstar, Norfair, Maridia, Tourian." 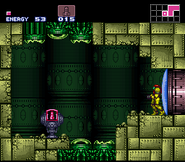