The Mk XII "Hydra" Multiturret is a turret equipped with two rail cannons. It operates via a targeting system, and is primarily used against enemy starships. Several can be found defending the Galactic Federation base on Norion in Metroid Prime 3: Corruption and is most likely used to guard other Federation bases. Samus witnesses one being destroyed by a Space Pirate fighter ship soon after landing on Docking Hub Alpha. 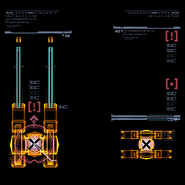 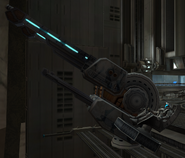 2006 Demo version.
Add a photo to this gallery
Retrieved from "https://metroid.fandom.com/wiki/Mk_XII_%22Hydra%22_Multiturret?oldid=255081"
Community content is available under CC-BY-SA unless otherwise noted.